Horse owners need to try and minimise risks to both foal and mare during foaling season, says Dr Mac.

It’s foaling season and, if you’re lucky, you’ll wake up one morning to find a cute new baby alongside your mare. But things can go wrong and you need to try and minimise risks to both foal and mare at foaling time.

Getting ready
A foaling ‘box’ or stable should be 4m x 3m (4m x 4m for large breeds) so there’s room for the mare to lie down to foal.
Grass or straw bedding is preferable to sawdust, which tends to pack into the eyes and nostrils of the newborn foal. It can also stick to the foal’s wet skin and be swallowed by the mare as she licks it to clean it after birth. Young foals will nibble at the droppings of their mother and can also eat sawdust, which tends to clog up their mouths.

Water containers must be located in a corner of the stable high enough so that the foal can’t land in the water as it’s born.
Most mares foal at night, between midnight and 6am, meaning mares should be checked before you go to bed and again at 6am. However, often the rest of the stable will notify you when a foal is born – all the horses neigh just after birth to welcome the new foal into the world. Unfortunately, foaling time is also African horse sickness time in SA, so stable heavily pregnant mares at night to protect them.

Signs of foaling
Pregnancy lasts about 340 days, or 11 months, but birth can occur as early as 310 days, or as late as 384 days.
Some breeds, such as race horses, are kept under surveillance before and during foaling. Their rectal temperatures are taken twice a day and there’s closed circuit TV in the foaling box. The groom sleeps in a stable next to the horses and a vet is on call 24 hours a day.

Under these circumstances, it can be noticed that the mare’s rectal temperature falls by one degree just before foaling. For breeders who prefer a more natural approach, it will be seen that the hips of the mare drop about five to seven days before foaling and the udder swells over the final two weeks. One to two days before the foal is born the vulva becomes loose and the teats on the udder ‘wax’, or become slightly shiny. Just before foaling, the mare becomes restless, lying down, then standing up, and milk may drip from the teats.

After foaling
It’s better if the mare lies down to foal, because the foal can be injured as it falls to the floor if the mother gives birth standing up. This is one reason why bedding in the stable must be deep. After foaling, the afterbirth is expelled within two hours and you should also inspect the mare’s vagina for any tears. The foal should start breathing straight after birth. The umbilical cord parts naturally as the mare stands up, usually 10 to 15 minutes after birth. It should never be cut, as blood from the mother continues to pump into the foal after foaling.

The foal usually rests for a while and stands up again after 30 minutes to an hour. It starts suckling after two hours. Once it’s suckling, the meconium, a slick, dark plug of faeces, is passed. When this happens it means milk is passing through the system and there are no blockages. Then you can put mare and foal outside in a small camp and give it a chance to bond with its mother and stretch its legs. 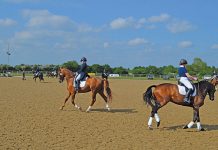 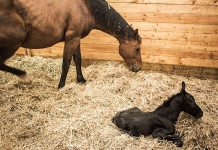 Glanders: what you should know