- Advertisement -
At the main entrance of Kalundu Dairy Farm (KDF) in central Zambia’s Chisamba area, it is immediately obvious that biosecurity is taken seriously.
A security guard at the entrance insists that the Farmer’s Weekly tour group disembarks from the bus and follows the protocol for limiting the risk of bringing pathogens onto the farm. We are instructed to walk through a germicide footbath and wash our hands, and even the bus is driven through a wide trough containing disinfectant. With this process completed, we are finally allowed onto the property.
READ: Boost your biosecurity

Kalundu Dairy Farm (KDF), established 17 years ago, is part of Zammilk, one of a diverse range of subsidiaries of Zambian agricultural company Zambeef Products Group (Zambeef). KDF is currently the largest single dairy operation in Zambia with between 900 and 1 000 cows in milk at any given time and a total herd of more than 2 500.

READ: Farming in Zambia: In it for the long haul

Zambeef has tasked KDF’s dairy manager, Steve Hapelt, and on-site vet, Dr Danstan Mwiinga, with growing the operation. Backed by a management team and labour force, the aim is to eventually have a total of 2 100 cows in milk, each producing an average of at least 30l/day. KDF produces more than 6,5 million litres of raw milk annually for Zammilk’s processing facility on Huntley Farm north of Lusaka, the country’s capital.

This facility can process more than 70 000l/day, and produces pasteurised and homogenised fresh milk, yoghurt, drinking yoghurt, cheese, butter, and milk-based juice drinks. Products are sold only on the Zambian market.

“Our dairy herd is 95% Holsteins. They currently average about 27l/day,” Steve says. “We send about 23 000l raw milk a day to Zammilk’s processing plant. Our existing dairy parlour has a 40-point swingover rapid-exit herringbone format and we milk twice a day. But we’re constructing and installing a 70-bail rotary milking parlour with a full ALPRO herd management system from DeLaval.”

Kalundu Dairy Farm runs its lactating cows on a total mixed ration (TMR) system. Two free stall barns, each able to house 320 cows, are already in use, with a third under construction. The farm will eventually have eight of these barns to house the planned 2 100 in-milk cow herd. Once heifer calves have received the required 6l of colostrum from their dams, they spend the first 90 days of their lives until weaning in calf sheds. The target weaning weight is 100kg. Steve is proud of the fact that KDF’s calf mortality in the first 90 days averages a low 0,1%.

Since inception, KDF has built up a strong genetic pool of dairy cattle and various dairy managers have implemented their own ideas of what they wanted the herd to be like, phenotypically and genotypically. Steve, in the hot seat for the past 18 months, is also working towards what he believes is the best for the herd and the business.

“I’m having our heifers and cows artificially inseminated with semen from four of the top 10 bulls on Holstein Association USA’s Total Performance Index,” says Steve. “World Wide Sires and Semex supply us with semen. We start by using sex-sorted semen to try and ensure we only get heifer calves. We’ll most definitely see the benefits of this in our cow herd.”

Steve and Danstan place great emphasis on selecting for specific traits they feel are best suited to KDF’s production conditions. These include longevity, udder structure, fertility and stature. KDF does not favour large-framed cows as they tend to be unsuitable for the high summer temperatures – up to 45°C – experienced in central Zambia. Steve explains that a smaller-framed cow, averaging about 540kg live weight, will give Kalundu Dairy Farm an extra two to three lactations.

The herd’s average lactation figure is currently just above three, but was below two in the past. Lactation periods currently average about 310 days.

“Misting systems don’t work because of the already high humidity level during the wet summers. We’re also installing rubber bedding for the cows to rest comfortably. To clean dung from the barns, a Bobcat scraper pushes cow waste into a pit at the end of each barn. We apply it to our lands as organic fertiliser.”

As a leader in Zambian dairy production, Kalundu Dairy Farm is often visited by government officials and tour groups. This continually exposes Steve, Danstan and their team to intense scrutiny on how they treat their cows. Steve stresses that inhumanely housed and handled cows would draw undesirably negative attention to KDF.

From a minimum weight of 350kg – typically at 13 to 14 months – heifers are inseminated with three straws of sex-selected semen. Heifers not conceiving from the sexed semen are then inseminated with two straws of conventional semen. If this also fails, the heifers are put to one of KDF’s on-farm bulls, but are culled if they still fail to conceive.

A heifer calf is moved to the calf shed only after it has drunk 6l of colostrum from her dam.
As Kalundu Dairy Farm currently has no fixed breeding season, Steve is in the process of synchronising the heifers to all calve during the dry season which is in autumn and winter. KDF’s cows are now being synchronised every week. The average conception rate with the first AI is currently 82% in heifers and 54% in cows.

Most of the feed is produced on the farm. Rhodes grass hay is grown and baled, and about 30 000t of maize silage was produced last year. Lucerne is also grown on one of KDF’s farms along the Zambezi River and then transported to Kalundu Dairy Farm. The only feed ingredients bought in are cotton seed oilcake, maize bran, and molasses. All concentrate feed ingredients are sourced from Novatek Animal Feeds, a Zambeef subsidiary.

Kalundu Dairy Farm feeds a lactating cow one of two rations, depending on lactation stage. A cow in early to peak lactation receives a 40l ration; tapering off in late lactation, it receives a 20l ration. The 40l ration is about 27kg TMR/ day. A nutritionist from Novatek Animal Feeds formulates the ration, which is fed twice a day (40% at 2am and 60% at about 12pm).

As with any dairy operation and despite their best efforts, KDF sometimes experiences health problems in its herd. A common problem is mastitis. To reduce this to a minimum, each quarter of every cow’s udder is stripped and then cleaned with a paper towel to avoid transferring any potential pathogens to another quarter. Workers wear latex gloves, and between moving from one cow to the next, each sprays his or her gloves with a disinfectant.

“Cows that walk a lot on concrete in the TMR system have more hoof ailments than those that spend most of their day on pasture,” Steve explains.

Zammilk’s main competition comes from dairy processing company, Parmalat, and imports of powdered milk and UHT milk from South Africa. Despite this competition, Steve is confident that the high quality of KDF’s raw milk and as a result the high-quality Zammilk processed milk products, gives his business an overall competitive advantage.

“Currently we can’t even meet domestic demand for Zammilk’s products,” he says.

“This is a good indicator of how popular these products are. And we want to grow the business to meet this demand.”

Kalundu Dairy Farm was one of the stops on the Farmer’s Weekly 2015 Readers’ Tour to Zambia.

This article was originally published in the 20 November 2015 issue of Farmers Weekly. 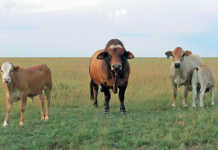 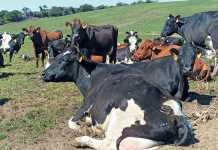 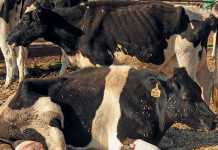 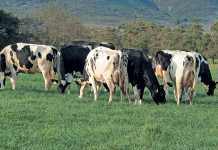 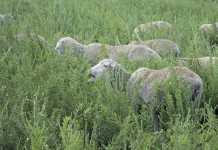