Simply taking a deep breath inside a broiler house can tell an experienced manager whether or not the house’s environment is comfortable for the chickens inside.

Poultry expert Bruce Gibson suggests broiler managers carry out the above exercise as often as possible to check the air the chickens are breathing is of the ‘right quality’.

Is there enough air in the broiler house

This feeling – that breathing is a little tough – is usually a sign of a poor flow of fresh air in the broiler house, explains Bruce.

The necessary adjustments to the equipment that controls airflow in and out of the house need to be made immediately he says. Managers should not panic and over correct, opening up the house too much so that broilers get cold.

“Airflow adjustments should be gradual, but frequent, until you’re satisfied that the birds are getting enough oxygen again,” suggests Bruce.

He warns that if airflow through a broiler house remains a problem even when ventilation equipment, such as curtains, louvres and fans, have been adjusted, it could be that there are obstructions to airflow inside and/or immediately surrounding the house.

The latter could be shrubs or trees, for example, and must be removed or pruned.

A build-up of ammonia gas is a common problem where there is a lack of good broiler management. Excessive ammonia in a broiler house can be easily identified. A deep breath will result in a burning sensation in the lungs, throat, nose and eyes.

Ammonia build-up is caused when water from leaks in the roof and pipes, and spillage from drinking equipment, mixes with the broilers’ bodily wastes in the litter covering the floor.

“A broiler manager must immediately remove wet litter and replace it with clean, dry material. The cause of the wet litter must be identified and fixed,” says Bruce.

A simple problem could be that the water level in the drinkers is too high. This leads to spillage and wet litter. Ammonia in a broiler house is strongest at floor level, where the broilers are.

Left unmanaged, the gas will cause serious respiratory and other health problems in birds, and money will be lost in treatment, through underperforming broilers and mortalities.

The mixture of wet litter and ammonia can burn the breast area of a chicken because it lies on the litter when resting. This could mean the downgrading or condemnation of meat at the abattoir, and could result in action taken against ‘inhumane conditions’. 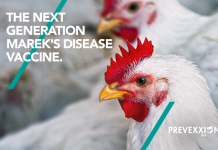