Dichapetalum cymosum, commonly known as gifblaar in Afrikaans, mogau in SeTswana, and poison leaf in English (right), is a small, low-growing shrub found in the northern parts of southern Africa.

Considered one of the ‘big six’ toxic plants in South Africa, it is a common cause of lethal poisoning in livestock. A 1996 estimate of plant poisoning cases in SA attributed 8% of cattle mortality to this plant. A total of 70% of fatal cases occur in Limpopo, with 10% each in North West, Mpumalanga, and Gauteng. Sodium fluoroacetate, present in all parts of the plant, is responsible for the toxic effects.

Affected animals will show shortness of breath and irregular heartbeat, with occasional neurological signs such as trembling, twitching and convulsions. Death occurs four to 24 hours after swallowing the plant. Above ground, the plant is a small clumped, woody shrub of about 15cm in height. However, it has a huge underground root system and sends numerous shoots above ground in favourable conditions. The most obvious above-ground parts are the bright green leaves, which are initially covered with fine hairs, and later become velvety. It has small white flowers, which occur as dense clumps in the early spring. 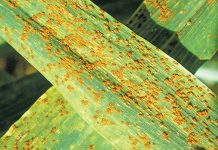