The Swartland Canola Competition recognises outstanding farming efforts, identifying trends that could help enhance the production of this crop. This year’s winner, André Brink, may have found the secret formula to canola success – nitrogen, seed density and rainfall.

André Brink Of middelpos farm just outside Philadelphia in the Western Cape is the winner of this year’s Canola Competition with an astonishing yield of 2,28t/ha and the highest profit margins.
Canola production in South Africa is estimated to cover only 40 000ha of which around 14 000ha is situated in the Swartland. The small size and newness of the industry does not yet justify huge research projects to enhance production and profit margins. The canola competition, therefore, aims to compare results of different producers and to identify trends that might help to enhance production. Results are influenced by climatic and production conditions. This is taken into account before drawing conclusions.

Sixteen Swartland farmers took part in this year’s competition. This year’s yields varied greatly from 0,6t/ha to 2,28t/ha. Sakkie Slabbert, the competition coordinator, says the average production of 1,4t/ha, which is 0,1t/ha more than in 2005, is a good reflection of the region’s potential. However, this does not match the 2002 season when production averaged around 1,49t/ha. Canola yield was between 42% and 45% of wheat yields. André managed to attain a yield representing 67% of his average wheat yield of 3,4t/ha.

This shows canola, under favourable climatic conditions and the correct production methods, can represent more than 60% of the average wheat yield. R esults clearly illustrate the impact of distributing nitrogen applications. The average yield of producers who supplied plants with 0% to 30% nitrogen (of the total nitrogen allocation at planting) during planting was 5% higher than the average yield attained this year. Producers who supplied plants with 31% to 41% nitrogen over the same period had a 33% higher yield. Yields of producers who applied 41% to 50% nitrogen were 15% lower, while producers who applied more than 70% nitrogen had 42% lower yield than the average. The bottom line, according to Sakkie, is that producers shouldn’t apply more than 40% nitrogen to canola during planting. A relationship between the amount of nitrogen applied and yields has also been established. Most of the participants applied between 60kg and 100kg of nitrocrops gen per hectare.

Just as in 2005, yields of participants who used planters were around 14% higher than those who broadcasted seed. Sakkie says the new generation planters may cause seeds to germinate and grow into strong plants sooner. Participants who treated seed with dimethoate this year also had higher yields than those who did not.
Chances for good yields seem to be best if producers plant directly after approximately 10mm of rain in mid-April and with as little soil disturbance as possible. This is not always possible, as not all growers own planters.
Early planting might become more frequent as competition with weeds increases. André, however, planted very late – in early May – and this seemed to have had little effect on his production.

Seed density results are somewhat contradictory. Producers who planted 3kg to 4kg or 5kg to 6kg canola seed achieved above-average yields. Those who planted 4kg to 5kg canola seed, however, attained yields up to 32% lower than the average yield. Sakkie says results suggest sowing more than 6kg seed per hectare is a waste of money, while sowing less than 3kg/ha seed can be risky under unfavourable conditions. Germination was good due to favourable climatic conditions. More than seven of the participants attained plant density of higher than 60 plants/m2. These participants usually applied greater quantities of nitrogen than other participants. Sakkie warns that supplying such high amounts is only beneficial with good rainfall. Germination on André’s farm amounted only to 37 plants/m2. “The chances for good yields are best with germination of 30 plants/m2 to 60 plants/m2, even though good yields have been attained with only 20 plants/m2,” Sakkie explains.

Insects were not a real problem this year, but increased termite activity has been noticed. Sakkie says this might be due to minimum tillage resulting in nests remaining intact. ”When lands are not ploughed, and plant material increases, there is more for the termites to eat, and they damage germinating plants.” For more information contact Sakkie Slabbert on (022) 433 2272. |fw

Weed control has become a challenge in the canola industry. Weeds, especially ryegrass, are becoming increasingly difficult to control in some areas in the Swartland.

The impact of simazine and terbutlazien has been erratic, even though the moisture content of the soil was good during planting. industry’s relatively small size makes the registration of new chemicals difficult. Some farmers have become so desperate that they are addressing herbicide problems with chemicals such as Atrazine, which have not been registered for use on canola, says Charl van Rooyen from the Western Cape Department of Agriculture. “More than half the canola farmers would be bankrupt without these unregistered products.

With no other solutions, they are forced to use them.” However, Mark Hardy from the Western Cape Department of Agriculture points out good rotation and production practices can make a huge difference in weed and pest management. Even so, participants who used trifluralin and Atrazine produced yields respectively 6,5% and 23% higher than the average. Kelly Becker, a marketing agent for Southern Oil, says the company is aware and sympathetic towards farmers, because they have a small variety of products available for pest management. The company has conducted a study that found that the use of these products poses no health risks. 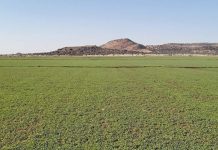