Strawberry production in South Africa is expensive, with exhorbitant set-up costs. The market is also very competitive. Mark Miller, operations manager at Redberry Strawberry Farm in George, spoke to Jay Ferreira about how the company has tapped into the local and export markets, and how agritourism has given them an extra edge over local competitors.

About a dozen growers produce 90% of the strawberries on the South African market. It’s a competitive industry, but Redberry Strawberry Farm near George in the Western Cape produces strawberries year round for the local and export markets.

In 2000, Mark Miller, farming operations manager at Redberry, and his business partner, Dave Cruse, bought a 16ha farm in Blanco.

“We needed a high-value crop for a relatively small area, and we believed George’s climate was well suited to berries,” says Mark.

READ How many harvests are left in your soil?

“There were big losses in the beginning due to wrong decisions about varieties and not knowing how to grow strawberries, which is an art in itself. It took us a couple of years to recover from these losses.

“The [set-up costs] of strawberry growing is so high, it’s hard to get your foot in the door now, but expansion is easier for existing growers due to growing programmes and markets.”

Redberry also has an agritourism component on the farm, with a coffee shop and farm stall.

Variety and genetics
Initially, Mark planted an Israeli variety. This turned out to be the wrong decision, as the variety wasn’t suited to the region, and Redberry lost a lot of money.

“Variety and genetics are everything in strawberry farming,” Mark explains.

According to Mark, it’s easier to recover from making a mistake if you are farming the right variety. With the wrong variety, you simply lose money.

“Each farming area requires a specific variety suited to the soil and climate,” he says.

“It was only after we planted the Plant Sciences short-day varieties from California that we started to turn a corner and get the sort of yields we had heard about. About 15 years ago, we were only harvesting about 150g to 200g per plant. Now the norm is 750g to 850g per plant.

“If you don’t get this, you probably need to re-evaluate your management practices.”
The optimal temperature for these varieties is 15°C to 25°C during the day, with night temperatures below 15°C, or the crop won’t flower.

George doesn’t experience climatic extremes and, while it has a high annual rainfall of about 700mm, tunnels keep moisture off the strawberry crops.

Temperatures seldom go higher than 30°C during the day, or 15°C at night.

“We plant the short-day Plant Science varieties at the end of March into mid-April. These include the Honour and Virtue varieties,” says Mark.

“Then we plant the day neutrals, San Andreas and Monteray, at the end of April into early May, and Albion in August.

“We start harvesting the short-day varieties at the end of July. The day neutrals are harvested from October to the end of February or early March.

“Our varieties won’t work well in a region such as the Northern Cape,” he adds.

“You have to trial cultivars to see what works in your area.”

Planting practices
At Redberry, strawberries are grown in plain soil under black plastic. The soil is prepared and fertilised with a mix prepared according to a soil analysis, before the ridges are mechanically pulled.

Successful cultivation depends largely on correct ridging practices, says Mark. “The mulch and plastic are also put down mechanically, along with the dripper line into the ridge.

“Then we apply a natural fumigant through the dripper followed by the pre-plant nutrient mix, which is mixed to suit our specific soil.”

Strawberry plants are spaced 25cm apart in double rows, with a dripper line down the middle. Mark plants a low density of 48 000 to 52 000 plants/ha.

“Plants are expensive, so it’s a big investment, and any profit is ploughed back into next year’s crop,” he says.

Soil probes read moisture levels, which are recorded so the lands can be irrigated accordingly.

“We normally have good rain in March/April and then again in spring, but we irrigate according to what the probes say and what we see in the field; we’re monitoring this all the time.”

The main pests on Redberry are bollworm and beetles, but the cyclamen mite (Phytonemus pallidus) is also becoming more of a problem.

“Bollworm can be sorted out with organic products, but the cyclamen mite lives in the crown of the plant and is very difficult to eradicate, and the chemicals used need to comply with registered [producer and exporter requirements], and acceptable residue levels,” says Mark.

“There are really good organic products, though, and we implement an organic programme every chance we get. It’s very difficult to grow strawberries 100% organically, but we do use soft products with short or no withholding periods.”

Producing strawberries throughout the year makes it difficult to eradicate a disease such as anthracnose, Mark says.

“We pick directly into the punnet, so quality control in the field is essential,” he adds.

“In the packhouse, we just weigh and label. Not only is the process labour-intensive, you can have problems if you provide an incentive for workers by paying them per unit packed, because there’s a chance they’ll pack sub-standard fruit. But we have some strict processes and consequences in place too.”

Because strawberries have a very short shelf life, logistics are also important.

“It’s a big challenge, and being in George is a disadvantage because we lose a day in getting our produce to market,” says Mark. “This means we have to pick [strawberries] with a small white shoulder, which is also the case for export strawberries.”

Economies of scale
At an average of 800g/plant, Redberry produces more than 430t of strawberries a year.

“If you had to take our harvest and put the strawberries in a row, it would stretch from George to Cape Town,” says Mark.

The farm’s strawberries are also exported to other countries in Africa, and as far abroad as the Middle East. “Once you have sold on the fresh produce market, you have no idea where it will end up,” says Mark.

However, only 10% to 15% of the crop is exported, and the rest is sold locally.
Strawberries are much trickier to export than other crops such as apples, due to its short shelf life.

“Adding value to strawberries is still a relatively untapped market too,” Mark says. “On
the farm, we also have an agritourism concern, which offers strawberry picking and other attractions such as a strawberry-shaped hedge maze, a coffee shop, bar and farm stall shop; these sell all things strawberry.

“It’s very easy to farm on paper with spreadsheets telling you what you’ll yield,” says Mark.

“We were sucked into that as well, but it’s quite different in reality. We thought we would at least break even, but every farmer will tell you it just doesn’t work that way.

“Although we thought we could produce strawberries in a very small area of land, economies of scale don’t allow it.

“Currently, we have 15ha of strawberries and 1ha of raspberries, and this requires
50 full-time workers. Mid-season, we go up to 200 staff when picking. We have our own transport and we bus in staff too.”

However, the most important aspect, says Mark, is to “be there, walking through your fields, and be passionate about what you’re doing. Your plants should be talking to you, telling you what they need. On a small farm like ours, you can do that.” 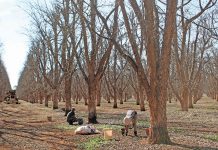 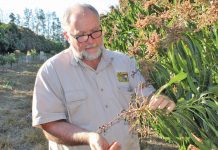