When preparing soil for sunflower, aim for efficient use of rainfall and soil moisture. Break the soil surface with a mouldboard or chisel plough to ensure maximum rainfall infiltration, reduce runoff and provide a suitable seedbed.
Sunflower is usually cultivated in rotation with maize or sorghum to benefit from the dense mulch produced by these crops. Mulch protects the soil from the impact of raindrops, which seal the surface and reduce the infiltration rate.

Plant sunflower from early November until the end of December in the eastern areas of South Africa and until mid-January in the western areas. When choosing a planting date, a number of factors should be considered: the onset
and last dates of frost, the soil temperature, the moisture requirements of the crop, rainfall pattern, other crops being cultivated and the risk of bird damage.

High soil temperature during planting time leads to poor emergence – a major problem in the sandy soils of the warmer western areas. In these areas it is better to plant before mid-November when the soil temperature is cooler.

Rows are usually 90cm to 100cm apart, but wider spacing can be used. Other crops such as maize are planted in rows 1,5m or even 2,1m apart, and sunflower can also be successfully planted at this row spacing to accommodate farm implements. This said, wide spacing is only really suitable for yield potential below 1?500kg/ha.

A correct and uniform plant density is the basis of a good yield. Although the plant can compensate by head size and number of seeds per head, a very low plant density (fewer than 20 000 plants/ha) often limits yield. At a low plant density, heads are too large and dry out unevenly.

Large heads also have a serious seed-setting problem. For example, a sunflower head of 30cm is likely to produce only 19g of seed (20% seed setting), compared with the 54g of a 16cm head (80% seed setting).

By contrast, a density of 55 000 plants/ha or higher results in a greater chance of lodging, so should be avoided.
At a yield potential of below 1 200kg/ha, avoid densities above 30 000 plants/ha, because the increased water use often causes water stress, poor yield or crop failure.

Plant sunflower seeds at a relatively shallow depth – 25mm deep in soil with a high clay content, and up to 50mm deep in sandy soil. A good planter is important. It should space seeds uniformly and have a good depth-control mechanism. It should also be equipped with press wheels, as good contact between the seed and the soil is essential. However, the wheels should only exert light pressure on the soil as sunflower plants are particularly sensitive to compacted soil during germination.

Young plants are highly sensitive to strong weed competition and cannot develop fast enough to form a full shade covering to suppress weed seedlings. For this reason, the first six weeks after planting are a critical period for the crop. Yield can be increased significantly by keeping the land free of weeds during this time with a combination of mechanical and chemical practices (see panel).

Although a number of insects and diseases may attack sunflower, the effects are usually not serious enough to hamper yield. Soil insects such as cutworms, dusty surface beetle and ground weevils may damage emerging seedlings. Discuss control measures with your extension officer.

Sunflower should be grown in rotation with other crops, as the risk of disease and weeds increases with mono-cropping. In addition, a yield and quality advantage is often seen in a follow-up maize or sorghum crop.

Start harvesting as soon as 80% of the sunflower heads are brown in order to minimise loss from birds, lodging and shattering. 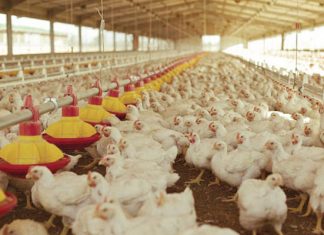