This breed matures early, producing meat with a high ratio of lean meat to fat. This makes it an attractive proposition to the modern consumer.

The Suffolk breed, the result of crossing Southdown rams and Norfolk Horn ewes, originated almost 200 years ago on the rugged south-east coast of England. Major Kitty Apthorp, who lived in the Free State, imported the first Suffolk sheep to South Africa around 1896.

In the years between 1900 and 1959, the breed suffered various ups and downs. Initially, registrations were handled by the SA Stud Book Association, which was launched in 1905.

In 1928, the first Suffolk breeders’ society was formed, but this did not survive, and registrations were again taken over by SA Stud Book.

The inaugural meeting of the present society was held in Bloemfontein on 5 September 1959. In October 1960, the society was properly constituted and the certificate of incorporation was issued by SA Stud Book.

Description
The Suffolk is a large, white, medium wool meat breed with a distinctive all-black head and legs free of wool.

Production norms
Early maturity ensures a slaughter lamb ready for market at an early age. The meat contains a high proportion of lean meat to fat.

Optimal growth rate of the breed:

The Suffolk is also used as a sire line for crossbreeding. Suffolk cross lambs, which are easily identified by their black heads and hoofs, can achieve a weight of 40kg, with the ideal 3mm back fat, at 15 to 16 weeks. 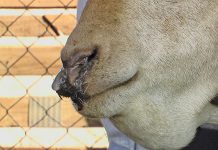