Home » Opinion » By Invitation » Agri commodity prices: what to expect over the next 10 years

The Agricultural Outlook 2019-2028, published by the Organisation for Economic Co-operation and Development and the UN’s Food and Agriculture Organization, provides a 10-year prospect for agricultural markets at the national, regional and global level. Prices for most agricultural commodities are expected to remain flat over the period as consumption of staple foods remains stagnant. 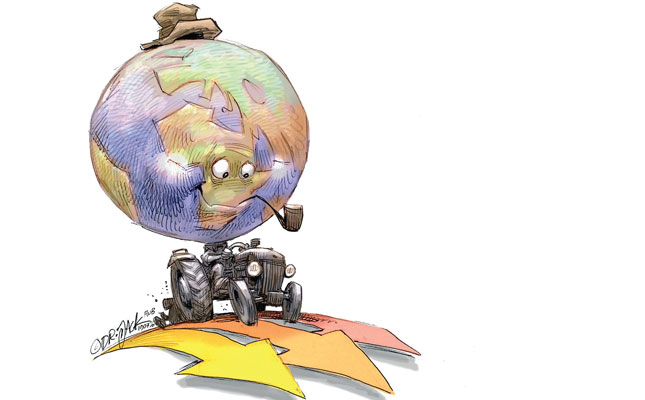 Pronounced price declines are expected for beef and mutton. For a few commodities (vegetable oil, ethanol, and skim and whole milk powder), real prices are expected to be flat or increase slightly, given their relatively low starting point.

Lower prices are a boon to millions of consumers worldwide, but also put pressure on the incomes of those producers who are not lowering their costs sufficiently through improved productivity.

A low-price environment could thus lead to increasing demands for support to farmers, which could in turn affect the projections.

Consumption flat in saturated market
In general, per capita food consumption of staple products (grains, pulses, and roots and tubers) has levelled off globally and will be driven predominantly by population growth, while the evolution of higher-value commodity demand (sugar, vegetable oils, meat, and dairy products) will be based on a combination of per capita use and population growth.

As a result, demand for higher-value products is projected to grow faster than for staples over the next decade.

Meat demand is expected to be relatively strong in the Americas, while low incomes continue to constrain meat consumption in sub-Saharan Africa. Fresh dairy products will meet much of the demand for protein in Asia (notably India and Pakistan).

More widely, per capita consumption of sugar and vegetable oils is expected to rise, driven by urbanisation and the shift to more processed and convenience foods.

Total food use of the commodities covered in this outlook is expected to grow steadily over the next decade at rates of 1,2% a year for grains, 1,7% for animal products, 1,8% for sugar and vegetable oils, and 1,9% for pulses and roots and tubers.

Robust demand for animal food products provides incentives to expand production in the livestock sector through larger herds. Paired with assumed improvements in offtake rates, demand for animal feed will be stimulated, with feed crops such as maize and soya bean expected to increase their shares in the global crop mix.

Hence, the growth in feed use of grains is expected to exceed the expansion of food use over the coming decade.

The projected expansion in crop output can be attributed primarily to yield improvements and higher production intensity, driven by technological innovation.

The foreseen growth in livestock production will be based on an expansion of herds, greater feed use and a more efficient use of feed.

The growing demand for agricultural commodities raises the question of how the agriculture sector will expand production to meet this demand, and importantly, whether it can do so sustainably.

Agriculture is a major user of land and water, and has a considerable environmental footprint.

For example, the conversion of natural landscapes to agriculture causes losses of biodiversity and an increase in greenhouse gas emissions, while the intensive use of inputs such as fertiliser and pesticides can affect ecosystems.

Prior to the ‘Green Revolution’ of the mid-20th century, crop production grew mainly by bringing additional land into production.

Historical estimates suggest that agricultural land use grew proportionately to global population until the middle of the 20th century.

Since the 1960s, increased use of fertiliser, pesticides and irrigation, and improved crop varieties, led to drastic yield improvements in many parts of the world. Since then, the
majority of incremental production has come from higher productivity, with a much smaller
contribution from an expansion of cropland.

Ongoing breeding progress, more intense use of high-energy and high-protein feed, as well as ongoing improvements in disease control and general production management, have increased productivity in the livestock sector.

Despite global population more than doubling since 1960, and global food production more than tripling, total agricultural land use (for crop production and grazing) is estimated to have increased only by about 10%.

More trade uncertainty
The regions where agriculture is most productive are not always the places where population (and hence demand) are concentrated. Agricultural trade is therefore essential for food security in some regions, and an important source of income in others.

Over time, agricultural trade has allowed an increasing differentiation between net exporting and net importing regions, with agricultural exports often originating from a relatively small number of countries while agricultural imports are typically more dispersed.

Since the early 2000s, growth in agricultural trade has been supported by a lowering of agrofood tariffs and trade-distorting producer support, and by strong economic growth in China.

Over the coming decade, agricultural trade will continue growing but at a slower pace, as global demand growth, and Chinese import growth in particular, slows. However, agricultural markets face a range of new uncertainties that add to the traditionally high risks facing agriculture.

On the supply side, these include the spread of diseases such as African swine fever, growing resistance to antimicrobial substances, regulatory responses to new plant-breeding techniques, and responses to increasingly likely extreme climatic events. On the demand side, they include evolving diets, reflecting perceptions with respect to health and sustainability issues, and policy responses to alarming trends in obesity.

A further factor is the uncertainty with respect to future trading agreements between
several important players on world agricultural markets. An escalation of trade tensions has the potential to reduce and redirect trade, with repercussions for international and
domestic markets.

This article is an edited excerpt from the OECD-FAO Agricultural Outlook 2019-2028.