Struggling consumers and high costs are threatening the milling industry, says NCM chairperson Billy Oosthuizen. Speaking at the chamber’s 77th AGM in mid-March, he called on members to act as an assertive, credible voice for the industry. 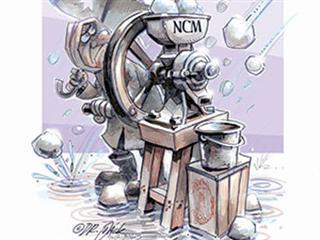 "After many years of growth, South Africa’s grain industry has for the past five months – post Marikana and the national transport strike – milled 124 000t less than for the same period a year ago. Wheat and maize have seen declines of 2,6% and 5% respectively. While its direct impact on the milling industry has not been quantified, labour unrest does have a significant effect on economic growth.

It is common knowledge that consumers are stretched. This is particularly so for lower LSM groups – the grain industry’s target market – who are largely dependent on government grants for survival. Meanwhile, loan sharks line up at grant payout points to collect their share. According to observers, as much as 70% of grants are paid out to these lenders, leaving just 30% for people to live on. How desperate a situation this is!

The grain industry, like so many others, has had to contend with spiralling costs in energy and utilities, wages and commodities – and soon e-tolling will be added. The combined impact of these costs, a stressed consumer and high levels of underutilised capacity is having a toxic effect on the health of the milling industry.

This ‘perfect storm’ places a huge responsibility on the industry to ensure that it remains viable. While it is not the role of the National Chamber of Milling (NCM) to solve millers’ financial woes, I fear that the industry might become so internally focused that broader issues will suffer. We must ensure that millers continue to have a credible voice and are capable of influencing policy affecting us at the highest levels of government and business.

Competition commission
The chamber has made significant, if frustrating, progress on the issue of outstanding Competition Commission information-sharing. After protracted negotiations with the commission, we believe that a workable proposal exists which should settle the matter, although it is premature to divulge the details. We are hopeful that the chamber will soon be able to collect, process and disseminate information for the industry, albeit on a more limited and lagged basis. Obviously, the latter will only be feasible with the total support of the industry.

In the aftermath of the Competition Commission matter, the chamber lost a number of members. However, we also gained a few, and on the whole have increased our representation of the industry. We welcomed Premier Foods back to the chamber this past year and are hopeful that now the matter has been settled with the commission, erstwhile members would wish to rejoin. The chamber responded to Grain SA’s application for a wheat tariff increase. The procurement committee made an oral representation to the department and a decision from the International Trade Administration Commission is pending.

Micro mills
An issue that could affect the milling industry in the near future is the stated intent of the Department of Trade and Industry, to establish – through the Industrial Policy Action Plan – micro mills in high grain consumption areas. It is imperative that the chamber plays a pro-active role in working with government to harmonise national policy imperatives.

Training
The NCM is revamping its training function and has made progress in revitalising the Grain Milling Federation. This has long served the industry with pride, and many have expressed the wish to give it a new lease on life. This rejuvenation has now begun. We have developed a new strategic framework and have employed resources and collaborated with relevant institutions such as Agri-Seta to ensure that rapid progress is made. This industry-driven initiative will require input from the entire milling fraternity. – Robyn Joubert

Contact the National Chamber of Milling on 012 663 1660.
The views expressed in our weekly opinion piece do not necessarily reflect those of Farmer’s Weekly.