Africa is the only continent which doesn’t grow enough food to feed itself. But a revolution is underway that can change that, and it’s affecting everyone from smallholer farmers to governments and corporations. So says Kofi Anan, Nobel Peace Prize laureate, former secretary general of the UN from 1977 to 2006 and chairperson of the Alliance for a Green Revolution in AFrica, which is working to improve the continent’s agriculture.

Food security is a challenge for every country, but in Africa the challenge is particularly urgent and serious. Africa is the only continent which doesn’t grow enough food to feed itself. It has failed, in recent decades, to see agricultural productivity keep pace with its growing population. But this is changing. In Kenya, for example, farmers have quadrupled production of maize and other crops by using lime to revitalise acidic soils.

Local lime companies have donated the cost of transporting soil nutrients, the Equity Bank has made finance available at favourable rates to farmers and the National Agricultural Research Institute is developing improved crop varieties and coordinating the entire effort. In Malawi, access to affordable fertilisers has greatly improved yields, and the country became a net exporter of maize for the past four years.

In the southern highlands of Tanzania, 700 000 smallholders produced 5 million tons of maize in 2009, more than any other region of the country. The World Bank has been so encouraged that it’s providing US0 million (R1,2 billion) to expand the initiative. But these and other success stories driven by targeted outside funding, also underscore the challenges faced by small farmers, and thus by the continent as a whole.

Africa’s food security problem can only be overcome by working in partnership with its smallholder farmers. More than three-quarters of Africa’s population is engaged in agriculture and related activities. The vast majority are women, mostly on small farms of 2ha or less. But while agriculture contributes one-third of the continent’s gross domestic product and most of its food, it has, until recently, received minimal support.

In the final decades of last century, African governments pulled back from desperately needed investment in agriculture at a time when the private sector was unable or unwilling to fill the void. Public expenditure for agricultural research and development for farmer training and support was slashed. Farmers had to rely on poor seed and depleted soil.

They were also severely disadvantaged by an unbalanced global trade regime, which sets up barriers to potential export markets, and prevents the development of food industries, while allowing surpluses to be dumped on the continent. This led to falling agricultural productivity, farmers trapped in poverty, growing shortages of food and millions more going hungry.

A uniquely African revolution
It was to address all these problems – and to understand why the lessons learnt from Asia’s successful agricultural transformation had not touched Africa – that, as UN Secretary-General, I commissioned a study from the Inter Academy Council. That study’s conclusions and recommendations have led to the concept of a “Uniquely African Green Revolution” – modern and sustainable agriculture with an emphasis on improved seed, integrated soil fertility and water management practices.

By basing the revolution firmly on smallholders, it builds on Norman Borlaug’s pioneering principle that food and nutrition security is best achieved by integrating agricultural research into appropriate technologies for farmers. Wanting to play a part in this transformation, I was delighted to accept, on leaving the UN, the invitation to chair a new organisation – the Alliance for a Green Revolution in Africa (AGRA).

Our aim is to help build the systems needed and strengthen the critical links in the entire value chain to make smallholder farming productive, sustainable and profitable. We are doing this by identifying, supporting and extending proven, local solutions for the benefit of hundreds of farmers, then thousands and, eventually, we hope, millions.

AGRA is starting to work with countries, donors, NGOs and farmers’ organisations to develop and implement strategies in those areas with the greatest potential to become Africa’s bread baskets and grow a large share of it’s staple food requirements. By concentrating resources here we hope to break through to delivering food security in Africa and eventually produce a surplus for export.

Support from all corners
African governments are recognising the economic and social benefits of investing in farmers and the rural economy. This can be seen in the Comprehensive Africa Agriculture Development Programme, which calls on African governments to put a minimum of 10% of their national budgets into agriculture, aiming at a 6% annual growth rate.This has spurred a new drive by developed countries to support Africa’s agricultural growth.

Indeed, never before has there been such a collective drive for change. This encompasses civil society organisations, philanthropic foundations and multinational corporations. Food security in Africa now sits firmly and rightly at the top of the development agenda. And this unprecedented coalition is having an impact. I saw some of this progress for myself when I recently visited farmers in Mali and heard from them the difference that access to high-yielding seed and fertiliser is making to their livelihood.

The transformation is remarkable, the potential even more exciting. Farmers grow new varieties of drought-tolerant and disease-resistant sorghum, maize and rice, using seed developed through conventional breeding techniques shaped and developed by African scientists and institutions. National agricultural research organisations, new seed companies and agro-dealer shops are all part of this transformation.

By organising themselves into farmers’ organisations, smallholders are freeing themselves from their dependence on middlemen who can take up to 30% of the value of their crops. These organisations also give farmers better access to storage, information on market prices and, where necessary, credit, so they’re not forced to sell their produce when prices are low. Similar programmes are at work across the continent, ensuring sustainable food production and changing people’s lives.

We now need to see sustained support and reliable markets in which farmers can sell their crops. In this way these tremendous but still temporary successes will become permanent. The World Food Program (WFP), for example, is working to expand market access by sourcing more and more of its food aid in Africa from local farmers.

Through WFP, Bread for the World and other organisations, the central role that women farmers play is finally being recognised. The women who produce most of Africa’s food are particularly disadvantaged economically and socially. They aren’t considered heads of households, rarely have land title rights and their interests are all too often overlooked by traditional financial institutions. We need practical measures from field to market to remove these obstacles, so that they have a voice and a stake right through them agricultural value chain.

This must include innovative ways of ensuring that their experience and aspirations help shape agricultural policy. But it’s not just female farmers who’ve found it difficult in the past to access investment. Despite the huge importance of agriculture to Africa’s economies, the continent’s commercial banks typically extend less than 3% of their lending to this sector. We have to put this right. Agriculture is a business. It must be financed like one.

And the huge need to provide farmers and agri-businesses with affordable credit is beginning to be met. AGRA and its partners have already mobilised US0 million (R1,12 billion) in affordable loans from local commercial banks through credit guarantees. We’re also seeing investment in, and support for, agro-dealer networks building thousands of rural businesses across the continent. These are helping millions of farmers in remote areas gain access to the basic ingredients of success, such as improved seed and fertiliser – as well as knowledge about their use.

To reiterate, the challenges remain immense. We are only at the start of a long and gruelling journey. But there was a real sense of optimism last month at the African Green Revolution Forum in Ghana. Aside from government leaders, parliamentarians, bankers, civil society organisations, scientists, researchers and farmers, I also saw something I had never seen before in Africa – company CEOs at an agricultural event.

It was an indication that the private sector was starting to realise the opportunities that this sector offers. Fundamental change is now within our grasp. The way forward is clear. We need to build on our successes, listen to the farmers, innovate as we go, and scale-up what we know works. Like any successful revolution, the goal must always be permanent reform. We need African governments to stand by and support their farmers through resource allocation and the right policy environments.

It’s also important that the developed world upholds its commitments to Africa’s development and continues to see agriculture as a priority for support. The private sector, too, has a huge role to play to invest in the new opportunities opening up. This includes investment in commercial farms, which can both encourage economies of scale and foster the uptake of new technologies.

When done responsibly, large scale farming systems can play an important role in directly supporting small farmers through technical advice and support and access to markets. However, care must always be taken to ensure local communities are consulted and their rights to land and natural resources are protected.

I don’t underestimate the difficulties ahead or the distance we have to travel. But if we stand together – governments, civil society, the private sector, the scientific community and farmers – and sustain our efforts, a unique African Green Revolution is within our grasp.

Visit the Alliance for a Green Revolution in Africa (Agra) website at www.agra-alliance.org. 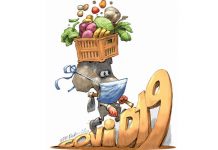 What COVID-19 has taught us about food security 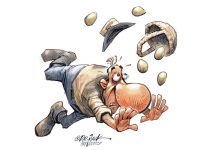 Diversification: an essential approach in a tough economy