Since 2007, a family-run citrus business near Fort Beaufort, Eastern Cape has partnered with the Industrial Development Corporation (IDC) to empower emerging citrus farmers in the former Ciskei.

“We have been in the business for 100 years, and we want to be in it for the next 100. To do that we have to start creating wealth for the local people.”

This is what Colin Painter, managing director of Riverside Advisory Services (RAS), had to say about the company’s eagerness to partner with the Industrial Development Corporation (IDC) in developing citrus farms in the upper Kat River Valley and near Alice, Peddie and Keiskammahoek in the former Ciskei.

RAS was created in 2009 as a subsidiary of Riverside Holdings (Pty) Ltd, which has been supporting emerging farmers in the area for more than a decade to boost fruit volumes moving through the Riverside packhouse on the outskirts of Fort Beaufort.

“The benefit was in the joint marketing and packing, while also bringing down our costs in the packhouse and increasing volumes,” Colin explains.

This Fairtrade-accredited business grows, packs and exports citrus for European markets and has been involved in the pioneering of citrus production in the region since the early 1900s.

But in 2000, Solly Sikotile from the former Ciskei approached the company for assistance and Riverside became aware of the need to assist emerging farmers. Solly was to be the first of five emerging farmers to receive technical and financial support from Riverside.

All the farmers had received land expropriated from commercial farmers for incorporation into the former Ciskei (which gained “independence’’ in the early 1980s).

However, by the mid-1990s, the implosion of the former Ciskei and subsequently the parastatal Ulimicor, that supported these emerging farmers, left many black farmers in debt and unable to farm effectively.

But since Riverside became involved, Solly has proved to be a skilled farmer and is one of nine emerging farmers who produce 20% of fruit passing through the Riverside packhouse. The packhouse is projected to process an estimated 17 000t fruit in 2012.

With the help of IDC funds, Solly expanded his citrus orchard from 25ha to 35,5ha along with 2,6ha of pomegranates. He is grateful for Riverside’s support, and especially that of his long-time mentor and friend, Lew Roberts, managing director of Kat River Farms (Pty) Ltd, also a subsidiary of Riverside.

“I have been working with him [Lew] for a long time. If I can’t sort out a problem, I phone him,’’ he says.
Colin is hopeful that the 17 emerging farmers in this area currently benefiting from the R77 million IDC funding and risk capital (in phase one and two of the IDC’s Pro-Orchard project) will make the most of the expansion of orchards from 97ha in 2007 to a projected 550ha in 2013.

Most will be citrus while pomegranate and avocado trees will also be planted. Colin points out that this would not have been possible without bridging finance from Uvimba Finance, along with R8,5 million grant funding for land preparation via the Comprehensive Agricultural Support Programme.

Fighting for state support
According to Lew Roberts, the IDC funding since 2007 for emerging farmers in the former Ciskei has come as a relief to Riverside, as supporting emerging farmers has put the company under financial strain.

“We thought we would go into this development and the money [from the state] would just flow, but it didn’t. All sorts of red tape crops up all the time,” explains Lew. “The initiative has not been easy; it’s put a lot of strain on our own resources.”

Colin agrees that the lack of reinvestment in Riverside has been directly linked to the company having millions tied up in loans for emerging farmers. “It is an enormous challenge, because we have not been able to reinvest in our own business,’’ he explains. “All our cash is sitting in these growers – R8,7 million up to date.”

He says that generally his attempts at leveraging effective and meaningful state support for emerging farmers has been disappointing. “The government works in silos,’’ he explains. “There has been inertia, lack of delivery and lack of caring as far as I am concerned.”

Colin says Riverside has waited for years for the signing of a lease agreement between the land reform department and a particular emerging farmer to legitimise IDC funding. Years in which Riverside has felt obliged not to let the particular farmer down.

“We had approval for IDC funding on nine projects, eight are operating, but for one we have been waiting for a simple lease agreement since 2006,” he says. “We can’t go and pull the plug on that grower.” Nevertheless, Colin is optimistic about the future. He says the Eastern Cape Department of Rural Development and Land Reform (DRDLR) has shown increased commitment in negotiations over the past few months to secure important funds via the Recapitalisation and Development Programme (RECAP) to contribute to phase three of the Pro-Orchard project.

“In the last few months I have seen them delivering; they answer their emails and phones. That’s a big change,” he says.
“The RECAP programme can really put these farms on a good footing and they will be able to sustain themselves after five years. We pushed hard to get the funds in place so they [emerging farmers] don’t have to rely too much on funding from us or the IDC – we have applied for RECAP [funds] for 14 farms.”

According to Colin, phase three – which has not yet been approved – will include funding from the IDC, DRDLR and Land Bank to expand orchards by another 400ha and establish an agro-processing facility.

A brighter future
Yes, financially it is hard on the company for now, but in the long term this is the way forward; this is the way we have to help. You can’t just sit and watch while your neighbour is struggling and you have the expertise to help him,” says Riverside CEO Sieg Gericke who left Fort Beaufort to farm in Zimbabwe more than a decade ago before returning to SA.

“When I left 11 years ago for Zimbabwe, the upper Kat River Valley was in a shambles. I came back 11 years later and everywhere you go in the upper Kat 2011you see citrus growing – it’s fantastic.” The redevelopment of this area is undoubtedly dependent on the impact of significant funding packages and also on the invaluable services that RAS provides to emerging farmers.

Upper Kat River emerging farmer Clifford Ncamile Dyonase has no doubt about the value of RAS’s mentoring and support, especially in light of its prompt accessibility and professionalism. “I can phone [RAS] any time for assistance. It helps us to do our books and taxes,” he explains. “And it is close by. If we request something we don’t need to wait for somebody in Port Elizabeth or elsewhere.”

Furthermore, he explains that an emerging farmer’s mere association with an established agribusiness such as Riverside can be significant. “I think IDC couldn’t assist us unless there were companies such as Riverside that have that potential. 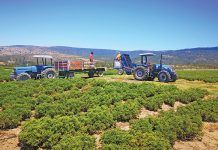