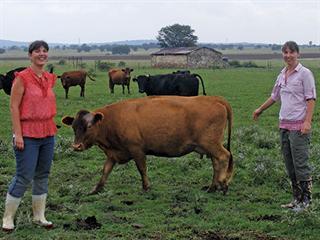 Dun-coloured and polled Dexters are rare in South Africa. Yet sisters Kelpie Oosthuizen and Bienkie du Preez are determined to introduce these genes into their Marso Uthando Farming’s Dexter stud. Although there is no scientific evidence to prove that dun-coloured Dexters hold any advantage over red and black Dexters, some breeders believe they do.

Naturally polled animals are, however, increasingly sought-after since they eliminate the need to dehorn calves, a stressful and labour-intensive process. Most feedlots also pay a premium for polled animals because injury and bruising are reduced, according to Bienkie.

Superior Dexters
Bienkie and Kelpie decided on Dexters in 2010 because the breed was ideal for their smallholding. “We took a decision to invest in our herd’s genetic base and import new genetics, as the South African Dexter gene pool is very limited,” says Bienkie. In 2011, after much investigation, she and Kelpie decided to import dun and polled genetics from Belle Fourche Farm Dexter stud near Atlanta in the USA, owned by Gabriella Nanci.

“It was difficult to find top quality dun bulls to obtain suitable genetics, until we chanced upon the Belle Fourche Dexters,” says Kelpie. “Gabriella had a young bull in her herd that impressed us, but it was still too young for us to collect semen, so we decided to wait. In July 2012 the semen finally arrived in South Africa.”

They imported semen from two bulls: Mrald Overture (118cm high) and Belle Fourche Clay (112cm high). Neither carries the so-called ‘bulldog’ (chondrodysplasia) gene that can cause abortion at seven to eight months. The dead calf shows obvious abnormalities, such as a nose that is pushed in and a head resembling a bulldog. Sometimes the viscera are not covered completely by the skin and the legs can be short and stubbed.

Kelpie explains that the dun colour in Dexters is the result of a recessive ‘b’ gene on chromosome 8. Where two b alleles are present in an animal (homozygous for b), the pigmentation is brown instead of black. A dun-coloured Dexter has two genes for dun, inherited from both sire and dam, and at least one black gene. A single dun gene will result in black pigmentation, although the animal will still carry the recessive gene.

Two black Dexter parents can produce either black, red or dun calves, but for two black parents to produce a dun calf, each must contribute a recessive dun gene. Red is the only colour that breeds true in Dexters, and two red Dexters produce only red calves, even if each parent carries a recessive dun gene.

“A Dexter with two red genes and two dun genes is red in colour,” Bienkie explains. “If a red Dexter with two (recessive) dun genes is crossed with a dun Dexter not carrying the red gene, the calf will be dun. Each dun calf from this breeding will carry a recessive red gene. Dun cattle can be produced from black cattle (carrying a recessive dun gene) and also from red cattle (carrying a recessive dun gene). Dun cattle can produce dun, red or black calves, depending on the compatible colour matings. The mutation causing dun is unique to Dexter cattle.”

Viable operation
“Our Dexters are run as a business. They’re not our pets, although we love each animal dearly,” explains Bienkie. “The breed is hardy. It has a small frame, excellent quality carcass and exceptional milk production, so it’s ideal to farm commercially on a relatively small area. And their stable temperament also helps in this respect. Our herd has proven to be economically viable, even in this relatively short period.”

The sisters’ long-term objective is to breed quality, dual-purpose Dexters with good milk production, that also perform well on the veld and in the show ring. The Dexter herd is run on 45ha mixed sweetveld and Smuts finger grass grazing, supplemented with salt and a Superphos lick in summer and a Premix 450 lick with lucerne in winter. The grazing consists of two camps, rotated weekly, with a shared watering point. The average carrying capacity of the area is 5ha/ MLU, but the sisters stock at a rate of 2,5 ha/MLU.

The animals are inoculated annually against major diseases in the area, including lumpy skin disease and BVD. They are dewormed three times a year, and dipped for external parasites when necessary. Cows are artificially inseminated, but heifers are naturally mated at 12  months. “The herd currently consists of 15 registered cows and 16 heifers and calves,” Kelpie explains. “We already have 11 Mrald Overture calves, consisting of 10 bull calves and one heifer. We’ll start using Belle Fourche Clay semen in due course.

“We only keep the best animals for our breeding herd. Animals not making the grade are sold out of hand, auctioned off or kept on the veld and sent to slaughter at 18 months.” The average birth weight of Marso Uthando calves is about 23kg with an average inter-calving period (ICP) of 379 days, although some cows have an ICP as low as 316 days.

“We concentrate on producing grass-fed beef and aim for top weaner weights and growth,” Bienkie explains. “Cow efficiency is vital – our cows must wean calves at well over 50% of their own weight. Growth is essential and a bull calf must at least equal his dam’s weight at 18 months.”

The sisters have selected three Mrald Overture bull calves and one heifer for performance recording. The calves are currently about six months old. The bull calves each weighed 185kg at six months – a cow efficiency of 56%. The heifer weighed 173kg, a cow efficiency of 55%. Bienkie and Kelpie plan to test Mrald Overture’s calves in a Phase D test with the Ngunis and have selected bulls that are Ingenity-tested.

“Our grandfather, Arie van Wyk, instilled a love of the land and cattle in us,” says Kelpie. “That’s probably why we started cattle farming. One of Overture’s bull calves was born on his birthday and was named after him. The calf is very promising, with an excellent temperament, and we expect great things from him.”

Bienkie adds: “While we’re not so naive as to expect the cattle to add economic value on all possible levels, they must make money. And so far, they haven’t let us down.”