Anette Theunissen, an animal scientist based at the Vaalharts Research Station, explains the results of a study conducted by researchers at the Agricultural Research Council’s Animal Production Institute, in collaboration with the Department of Agriculture, Land Reform and Rural Development, to evaluate the use of a temperature humidity index as a measuring tool for heat stress in beef cattle.

With beef cattle in the Northern Cape and North West in particular, but also in parts of KwaZulu-Natal, heat stress is known to be a major source of production losses.

The index is a measure of apparent temperature, caused by the combined effects of air temperature and relative humidity on the subjective perception of heat and humid weather. Wind speed can be an aggravating factor. These handy tools can be used for risk management of heat stress and may prevent adverse effects.

Although there are several categorisations of heat stress indices, SAWS has categorised the livestock weather safety index as ‘normal’ under 74, ‘alert’ between 74 and 79, ‘dangerous’ between 79 and 84, and ‘emergency’ when above 84.

It is plausible that higher humidity equates to higher effective temperature at lower thermometer readings, putting animals into heat stress at a lower environmental temperature.

The Northern Cape and North West are well known for their extensive commercial livestock and game farming operations in inland areas. These provinces are prone to extreme climate events because of their geographic locations, and the agriculture sector here is highly vulnerable to climate change.

The ‘Climate change status quo report for the Northern Cape province’ (2015) states that in this province, as well as in parts of other provinces, the rainy season is likely to shift to later in the year and be of shorter duration, and the dry spell is likely to increase in length, resulting in drought, with negative implications for agriculture and water supply. The magnitude of heat stress is also expected to be severe.

As for the effect of temperature alone, it was established that for every 1°C that daytime temperatures exceed 30°C, most breeds and varieties of livestock reduce their feed intake dramatically.

In some cases, feed intake has been observed to decrease 5% per 1°C above 30°C. Reduced feed intake reduces productivity in all forms of livestock, and how an animal responds to heat stress may well come to influence farmers’ breed selection.

Sanga vs European sires
Crossbreeding research at the Vaalharts Research Station where Sanga (indigenous or locally developed), Afrikaner, Bonsmara and Nguni cows were mated with Afrikaner, Bonsmara, Nguni, Angus and Simmentaler bulls, was conducted during the 2015/2016 and 2016/2017 summer seasons.

The 2016/2017 season, however, was wetter and cooler. Post-weaning growth (average daily gain) of weaner bulls for the two consecutive years was recorded every seven days under feedlot conditions.

The very dry and hot 2015/2016 season also had an effect on the post-weaning growth of these cattle breeds.

The average daily gain of the Angus-Simmentaler calves decreased 17%, whereas that of the Sanga types decreased 9% as the result of the heatwaves.

As far as weight traits are concerned, the severe drought and extreme heat had a greater effect on the exotic breed types.

But it is also widely accepted that indigenous breeds with small to medium body sizes are hardier, more fertile and uniquely adapted to harsher environments, unlike larger exotic breeds. For this reason, it should be remembered that some breeds may regulate their body temperatures well and have the ability to resist heat stress, but their productivity may nonetheless be lowered.

Therefore, the best long-term solution to heat stress is to use cattle that are genetically adapted to cope under these conditions. 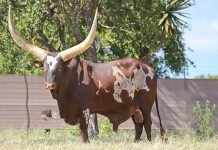 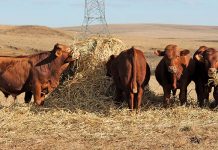 Committed to improving the productivity of livestock farmers