The Daybreaker Beef Off Grass brand, a partnership between farmers Llewellyn Maclean and father-and-son team Pieter and Koot Prinsloo, aims to create a market for selling oxen as grass-fed beef.

Llewellyn Maclean is a numbers man. When he goes into a beef venture, he makes sure that the price/kg, the kg/ha and profit make sense. Llewellyn, a partner in the Daybreaker Beef Off Grass brand, farms in the Queenstown/Sterkstroom district with registered and commercial Beefmasters on 3 100ha spread over several farms. He owns two-thirds of this land and leases the remainder.

A graduate in Grassland Science at what is now the University of KwaZulu-Natal, he has applied an exacting table of data to compare his oxen ranching system with his weaner production system over a 10-year period.

“Early in my farming career, going back to 1989, I realised the benefits of a dual system of oxen and weaners in my area,” Llewellyn says. “I had a problem on certain leased farms where some of my neighbours’ bulls would break the fence to get to my cows.” The solution, he realised, was to run oxen on those farms.

Why oxen?
An oxen system has several advantages, Llewellyn explains. These include:

“To work out if it was financially worthwhile, I developed a programme to show exactly what I was producing,” he recalls.

Today, Llewellyn runs more than 800 head of cattle, including 400 cows, 220 heifers and young bulls, and 180 oxen. He sells up to 30 registered and ranch Daybreaker Beefmaster bulls each year at the ‘Bulls on Grass’ sale in Queenstown every August. For this sale, he partners with two other Beefmaster breeders – Benchmark Beefmasters and Corbett Beefmasters. The three partners collectively sell 70 bulls annually.

His oxen component is divided into three age groups: one, two and three years old, with 60 oxen per group. Comparing his 2013 oxen and weaner results on similar farms of 544ha each, he has found that an oxen component is “definitely worthwhile”. He compared 60 three-year-old oxen slaughtered at an average of 535kg each, with 66 weaners sold to the feedlot at an average of 228kg each.

“On average, I earned R30/ha less for the oxen in 2013, but without any of the costs and management issues associated with weaners,” Llewellyn says. “The R30 advantage for weaners can also disappear, as the weaner price can drop by 30% to 40% in a season.”

Such is his belief in oxen that Llewellyn recently entered into a grass-fed oxen partnership with his neighbours Dr Pieter Prinsloo and his son Koot, who also farm Beefmasters. Like Llewellyn, the Prinsloos run a dual system of weaners and oxen on their 3 000ha Queenstown-district farm, Hartebeesfontein.

New opportunities
This year, the partnership established the Daybreaker Beef Off Grass brand. The aim is to explore new marketing opportunities to sell three-year-old oxen as grass-fed beef. Together, they plan to at least double the number of oxen produced to 130 or more over the next year.

Says Pieter: “The consumer will be assured – and we’ll include this on our label – that our beef comes directly from our farms and that the animals received no growth hormones or antibiotics. Grass-fed beef is also rich in essential nutrients.”

A growing number of consumers, particularly in the higher LSM groups, want to know what they are eating, he adds. “They’re welcome to visit our farms. It’s all about the consumer being able to trace the product back to the farm. This is a major trend in the USA and elsewhere, and it will become more prominent in South Africa.”

Pieter and Llewellyn have registered their new brand with the Grass Fed Association of South Africa (GFSA), and have started marketing their beef through Andrew Nel, a well-known restaurateur and butcher in Queenstown.

“Once we’ve established how consumers respond to our beef, we can expand to include other cattlemen producing beef according to the grass-fed protocol, which includes Samic [South African Meat Industry Company] inspections,” Pieter explains.

Real change is needed
Pieter is the Red Meat Producers’ Organisation (RPO) chairperson for the Eastern Cape, and in this capacity attended a recent meat symposium at the University of Pretoria entitled ‘Relevance of the South African Carcass Classification System’.

In his opinion, the discussions omitted an important topic: the price paid to cattlemen for AB-grade (20-month to 28-month) beef and B-grade (28-month to 36-month) beef. These are several rand/ kg below that of A-grade weaners or pre-two tooths, and this is the reason many cattlemen do not rear ABs or Bs: the profitability of keeping animals on the veld for longer is simply not worth their while.

“On the positive side, Prof Linda Frylinck and Dr Phillip Strydom from the Agricultural Research Council’s Animal Production Institute submitted research results showing that far more factors determine tenderness or toughness than the age of the beef, which is what the current grading system is based on,” says Pieter.

The research showed that in some cases, AB- and B grades were more tender than A grades. It suggested that the use of growth hormones such as Zilmax, which are widely used in feedlots, could have a toughening effect on meat. “Their research also revealed that age definitely enhances flavour, hence the beef with the most flavour is AB-, B- and C-grade [from 36 months],” says Pieter.

He is outspoken about the fact that the consumer is not being educated on the differences between veld-reared and grainfed beef.

“The marketing and education of South African beef should not be done through the South African Feedlot Association (SAFA), as is currently the case,” he says. “This creates a perception of bias or prejudice, and there’s certainly insufficient awareness-creation among retailers or consumers about the benefits of grass-fed beef, and how the meat-grading system is structured.
“The grading system currently indicates only the age and fat covering of the product, which is insufficient. Cattlemen face a situation of discrimination against the more creamy-coloured or yellow fat of grass-fed beef, and receive less for such animals.”

Fatty facts
According to Pieter, retailers see white fat as more desirable, but what they do not know is that creamier/yellower fat has been scientifically proven to be more nutritious, with the correct balance of Omega 6 and Omega 3 fatty acids. “They also don’t know that all grass-fed, veld-reared or naturally fed animals, across all age groups, have creamier/yellower fat.”

Instead of adding to the endless talk about the need to market grass-fed beef, Llewellyn and Pieter have decided to see what they can achieve with their brand, and trust that other farmers will do the same. “Our system involves keeping our own steers and rearing them as oxen until they’re ready to market at three years, at an average of 535kg or more, depending on seasonal rainfall,” says Llewellyn.

To achieve good results, they select steers on quality and type, and run three age groups, as this allows for flexibility in a dry year.

“Oxen can compensate in good seasons and recover to be sold. But they need good veld to produce well. It’s not a good idea to put oxen on the worst marginal veld and expect good production. The better the veld, the better they’ll perform, and the higher the weight gain.” 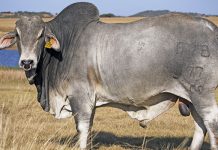 What to look for when buying beef breeding stock 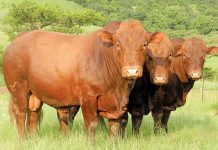 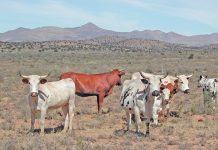