In mid-winter, fodder is always short and we need to know if horses can safely eat what’s available and affordable. Dr Mac provides some answers.

Smutsfinger grass allegedly came from an improved strain of Digitaria cultivated by Jan Smuts on his farm in Irene, Pretoria. ‘Finger grass’ is derived from the flowering head, which extends on a thin stem above the leaves and is crowned by six or seven finger-like flower spikes. Traditionally, the strain cultivated by Smuts had only five flower spikes, like a hand with fingers.

At one time Smutsfinger was called Digitariasmutsii, but the new species name for this pasture grass is eriantha and its common name is ‘pangola grass’. Native to tropical Africa, this grass has many forms and is available globally as a hardy perennial pasture grass and also as foggage (standing hay) or baled hay to feed ruminants.

Smutsfinger is planted from stolons or roots, rather than from seed. The grass grows up to 1,2m high in tufts and spreads through pale reddish, looped rhizomes or stolons, which develop roots where they touch the ground. Although these are hairy, the leaves are smooth, broad and spear-shaped. The yellowish hay looks a little like straw, because of the large flat leaves, but it’s very palatable.

Tucking into it
The question is – will horses eat it? As you can see from the photograph, they tucked into it willingly and have maintained body mass despite the cold weather and poor grazing in Gauteng during winter. It was, unfortunately, also very attractive to cattle and game. When the horses were stabled at dusk, these made their way through any open gate into the horse paddocks, preferring the grass to the sourveld grazing.

Pangola grass is used as grazing for horses in Australia and New Zealand, where it was recorded as causing ‘big head’, or nutritional hyperparathyroidism. This is generally linked to increased phosphate in the diet and Smutsfinger is known to be low in phosphate (unlike oat hay).

However, the disease was seen when the pasture was particularly green and lush, like kikuyu. Under these circumstances it’s probable that uptake of calcium was inhibited. This is unlikely to occur in SA, I believe. Smutsfinger pastures can easily be destroyed by overgrazing, so it’s not advisable to use it for grazing by horses, as replanting might be needed in the new season.

Mycotoxins
Smutsfinger is very susceptible to rust if bales are stored under damp conditions. This can be seen as a grey layer on the surface of the bale, while close inspection will reveal brown spots on the leaves. Horses tend to be more sensitive than ruminants to mycotoxins (poisons generated by fungal diseases of plants), so any mouldy portions should be trimmed off and discarded.

As this grass isn’t usually used for feeding horses, there’s no literature on whether mould on it can be dangerous but, in general, mouldy hay can cause colic and even abortions in horses. If well-fertilised, Smutsfinger is a valuable source of nutrients in winter with a protein level comparative to lucerne. Although it can become coarse and stalky if cut late, it’s still a good source of digestible energy, particularly for breeding herds.

The bales can be put out in the fields, but it would obviously be more economical to feed Smutsfinger in individual hay nets – about 4kg/adult horse/day. Usually only available in 1,2m round bales, Smutsfinger is about half the price of lucerne or tef hay. 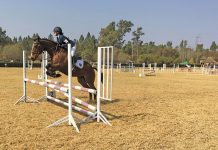