Contracted tendons can be acquired or congenital. In either case they require attention, and possibly intervention by a vet, says Kim Dyson.

‘Contracted tendons’ is a condition where a horse’s leg stands unusually upright, normally at the fetlock or coronary band. When the condition is extreme, the horse or foal may not be able to stand comfortably.The condition can be either congenital or acquired.

Congential
If a foal is born with contracted tendons, these will almost invariably be in the forelimbs; the hind limbs are very rarely affected. Affected foals are usually born with very straight pasterns and the foal will need assistance in standing. The ligaments are lax, the tendons may seem to be too short or too long and the foal may appear to have odd leg angles.
A mild case of contraction will correct itself with movement. If the condition is severe and does not clear up, contact your vet.

Acquired
In the case of an acquired condition, the foal is usually born with normal conformation. Contraction develops during the period of rapid growth or as a result of injury. The acquired form generally affects the fetlock and pastern joints, but not usually the knees. The horse is invariably in pain.

If your young horse gains weight too fast, it can develop contracted tendons. The reason for this is that the weight gain causes the heels to be lower than normal and the angles of the hoof to decrease, outstripping the rate of maturation and hardening of the horn of the hoof wall.

Unstable
In a case of contracted tendons, the front fetlocks tend to shake and be unstable. The horse will have a typical ballerina stance – the heels lift off the ground and the horse stands on its toes. Because the horse is bearing weight on the toe, the hoof wall will be damaged.Eventually the horse will buckle at the knees.

It is important to provide a pregnant mare with nutritious, well-balanced feed yet avoid overfeeding. This will ensure that the foal has the best chance of being born in a healthy condition. Balance is key. Avoid extremes in diet and exercise.

Treatment
Foals should be checked frequently to establish that limbs, fetlocks, joints, hoof angles, the horn of the hoof wall and other features are developing properly. Injuries should be treated promptly and not allowed to affect the movements of the young horse.

The sooner you treat contracted tendons, the better the prognosis. Rasping the bearing edge of the hoof wall in the toe area and using shoes with heel wedges to increase hoof angle is helpful. Although hoof angle in a young horse is greater, it should decrease to the normal 50° by about a year of age.

Contact your vet as soon as any problem is observed. Specially padded wrap-around splints may be applied to hold the fetlock, pastern and toe in the correct position. Standing or exercising the foal on a hard surface will aid in stretching the tendons.

Some foals may be helped by an injection of a large dose of oxytetracyline antibiotics. Foals that go straight up on their toes should be kept on soft bedding and given medication to relieve pain and inflammation. If not managed early, an upright foot may become a club foot (a particularly upright hoof), which may require surgical correction.

When the problem is serious
In severe cases, including those involving older horses, surgery may be the only solution. All horses facing surgery for contracted tendons should have their hoofs trimmed or shod before surgery so that the limb does not have to be handled after the surgery, the bandaging can be properly done, and the horse can walk soon after the operation.

Your vet may shorten the toe by removing the hoof wall to increase sole depth, helping to make the angles more correct. The horse may be shod with a toe extension to force the heel down, causing the flexor tendon to stretch.
If the contraction is of the corono-pedal joint, the inferior check ligament is usually cut.

In the fetlock joint, the superior check ligament and the deep digital flexor tendon may need to be cut. This is not always successful and should be done as a last resort.

Following surgery, hand-walk the horse daily for the first 10 days for short periods. As the site of the surgery heals, walking time should be increased. Pressure bandages should be kept on the affected limb for approximately 60 days. 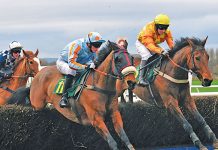