The market for slaughter and breeding goats in South Africa appears to be almost insatiable. With more than 60% of the local goat population in the hands of smallholder farmers, this sector should be benefiting from the strong demand. Denene Erasmus reviews some of the recent research into the factors preventing the smallholder sector from taking full advantage of this opportunity.

The popularity of goats in developing countries can be attributed largely to their hardiness, their value as social currency, and the reduced risk associated with smaller animals compared with cattle.

This is according to Carina Visser and Esté van Marle-Köster of the Department of Animal and Wildlife Sciences at the University of Pretoria in their article, ‘Challenges to the development of a rural goat industry in South Africa’.

“More goats can be kept and cared for on a piece of land that may be able to support only one bovine,” they add.

According to the article, one of a collection published last year by the UN’s Food and Agriculture Organization after its European Regional Conference on Goats, goats are often seen as a form of ‘fluid capital’, as they can easily be sold to cover immediate expenses such as school fees or fodder purchases for the rest of the herd.

Goats kept in smallholder and communal systems are usually hardy and adept at foraging in degraded environments, but tend to have low productivity and poor meat quality, say Visser and Van Marle-Köster.

At the same time, South Africa is one of the few countries to have successfully developed goat breeds such as the Boer, Kalahari Red and Savanna, which are used worldwide.

This is according to Mohlatlole et al in ‘Addressing production challenges in goat production systems of South Africa: The genomics approach’, in Small Ruminant Research, the official journal of the International Goat Association.

However, although important commercial goat breeds have been intensively studied, there is still a significant proportion of untapped genetic diversity in village and feral goat populations.

“The smallholder sector is comprised of goat farmers that produce for family consumption and are usually found in the communal areas of the country,” note Mohlatlole et al. “Herd numbers are usually small, and the goats are often left to fend for themselves and are occasionally supplemented with household leftovers.”

In addition, the ruminants are associated with low growth rates and mature body weights as goats in this sector have not been genetically improved for meat yield or quality.

The researchers write that genetic improvement in South Africa’s goat industry is still in a developmental stage. Although South Africa has successfully developed meat goat breeds such as the Boer goat and Kalahari Red, they state: “There is still a gap in the development of goats that fit smallholder production systems characterised by high prevalence of diseases and low and poor-quality nutrition.”

According to Visser and Van Marle-Köster, although goat production in rural areas has the potential to contribute to food security and commercial development, it faces several challenges.

In order to address these challenges, Visser and Van Marle-Köster recommend that, through government extension programmes and other farmer development programmes, attention should be given to “range management, feeding systems and herd health management, efficiency of production, and use of unconventional feeds”.

These researchers also suggest that a breeding programme aimed at providing improved breeds for the communal and informal smallholder sector, should focus on selecting
animals for sustainable production under extensive farming conditions.

“This selection should include emphasis on maintaining the strong characteristics of local breeds with regard to their adaptive capacities to relatively poor nutrition, and their superior ability to survive tick-borne diseases compared with commercial goat types,” say Visser and Van Marle-Köster.

While there is no doubt that several challenges must be overcome for rural goat keeping to develop into viable small-scale production, it is also clear that opportunities exist for communal goat farmers to develop from being “goat keepers for household food security to becoming commercial small-scale goat producers”, say Visser and Van Marle-Köster. 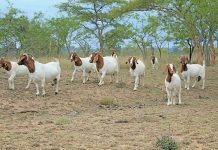 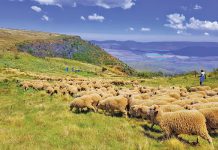 Productive ewes: the bedrock of the Jordaan Merino stud