The devastating drought in the Northern Cape that lasted from 2018 to 2020 taught award-winning new sheep farmer Etienne van Wyk many lessons about sustainable farming. Annelie Coleman visited him on his farm, Spes Bona, near Marydale.

He received the 3 800ha farm, which is near Marydale in the Northern Cape, in 2015 from the state on a long-term lease, with the option to buy after 30 years. He initially ran a successful business, but the extremely challenging drought put his farming enterprise under severe pressure.

“These years taught me a valuable lesson, which is to do all I can and to think outside the box for my business to remain sustainable. The conclusion I reached was to start expanding vertically, since my business is now in a growth phase following the good rain we’ve received so far this summer,” he explains.

Van Wyk started off with a flock of 500 sheep, but since 2018 he has been forced to reduce the flock to 300. His plan now is to increase this over the next couple of breeding seasons to 400. He decided on a lower stocking rate to allow the farm time to recuperate fully, as it takes between three and four growth seasons for drought-ravaged veld to regain its full potential.

Financial erosion
The drought has eroded all his savings and resulted in a bank overdraft, says Van Wyk.

“During the first year of the drought, I decided not to reduce the size of the flock, but to rather feed the animals, never expecting the drought to last so long. I eventually had no choice but to cut numbers. One of the valuable lessons the drought taught me is that if it doesn’t rain sufficiently by March of any year, I have to start culling. But not only the poor performers and old animals; I now select ruthlessly and keep only the best of the best.”

The Van Rooy excels in tough farming conditions because of the breed’s hardiness and good mothering instincts. Van Rooy ewes are in high demand in extensive regions where crossbreeding aimed at slaughter lamb production is practised. Crossbreeding fat-tailed sheep with breeds such as the White Dorper results in excellent fat distribution.

Value adding
Van Wyk says the drought also taught him the importance of adding value on all possible levels in his farming concern.

“This is of particular importance when farming a relatively small area. I couldn’t continue in the same way I did before the drought and therefore decided to take the stud breeding route. It costs virtually the same to rear a stud animal as it does a commercial animal, but the return on investment for a stud animal is considerably higher.”

Climate change is a reality and increasing temperatures a given, he says. Producers will therefore have to take heed of the impact of ever-increasing maximum temperatures in
sheep production areas in the future.

It makes economic sense to farm an indigenous breed that will maintain high reproduction and growth rates despite the expected challenges posed by climate change. For Van Wyk, the Van Rooy is such a breed. It is extremely hardy, well adapted to South African conditions, and resistant to disease and external parasites, mainly because of its thick skin.

The breed was developed particularly for slaughter lamb production by Senator Johannes van Rooy from Bethulie in the Free State. In 1906, he started experimenting with the development of a new breed that could maintain top performance even during the regular droughts South Africa is subjected to.

He crossbred Blinkhaar Afrikaner rams with Rambouillet ewes. Later on, polled Wensleydale genetics were introduced to achieve good conformation, with as little fat localisation on the body as possible and only a reasonable fat accumulation on the rump.

“I’ve found that the Van Rooys manage to grow and maintain reproduction levels even under the most difficult conditions with the minimum of grazing. Because of its fat tail and fat reserves, the breed retains good condition,” says Van Wyk.

Quality, not quantity
He plans to have a fully converted stud breeding concern within the next two years. Although he will, as a matter of course, have to buy in some new genetics, his main aim is to breed up carefully selected animals from his own flock from now on.

Van Wyk believes it is not wise to blindly chase animal numbers, often to the detriment of genetic value and integrity, at all costs. This is underscored by his decision to limit the Spes Bona flock to 400 animals.

Branching out into stud breeding is not alien to Van Wyk, as he grew up on the Kasteel farm of well-known Van Rooy and White Dorper breeder Dries Wiese in the Loxton district.

As a young boy, he acquired his farming skills and passion for the industry alongside Wiese, whom he shadowed from when he was about four years old.

Van Wyk completed matric at Oakdale Agricultural School in Riversdale in the Western Cape and obtained a diploma at Grootfontein Agricultural College. He then worked on Kasteel as a foreman before being appointed manager of the 17 100ha Wiese farm, Bulberg, in the Vosburg district.

He was in charge here for about seven years. Now he is taking on the challenge of starting his own stud business.

“I never stopped asking questions and Dries patiently answered. Today, I look back on those years with deep appreciation for the Wieses’ investment in my life. Dries and his son, Pieter, gave my farming career a jump-start. Their advice and mentorship played a big part in my decision to pursue stud breeding.”

Gavin Penderis, a previous owner of Spes Bona, also plays an important role in Van Wyk’s business as a mentor.

One of the most important lessons Van Wyk has learnt so far is to be financially responsible.

“Flock improvement is essential to the long-term survival of any livestock enterprise.
It’s simply stupid, for instance, to buy the latest model bakkie while your livestock quality is second-grade. The value of a top-performing flock has been proven over and over during the drought. Were it not for the investment I made in the quality of my breeding animals, I would have had to reduce numbers [even] more drastically,” he says. 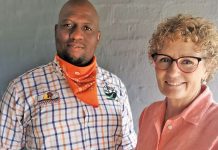 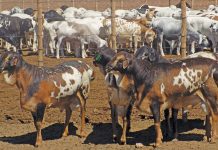