By incorporating vermicomposting and worm-casting tea in its apple production system, Clan Leslie Estate has improved its fruit quality, reduced input costs and improved the soil and tree health in its orchards. Hayden Green visited Mike Leslie to find out more.

Mike Leslie farms in partnership with his father Nick and brother Graham on the Clan Leslie Estate near Harrismith in the Free State. Like’s farming philosophy is to keep things simple, but pay attention to detail. He’s passionate about apple production and about where sustainability is taking the enterprise. He combines technology with applicable management and biological farming techniques to produce fruit that looks good, is healthy and nutritious, and exceeds export quality requirements. To achieve quality and production goals, Mike also partners with nature’s prime recycler – the humble earthworm.

Vermiculture – earthworm farming
To branch out into exports, Clan Leslie established its apple production division in 1996. Five years ago, they decided to integrate vermiculture into the operation because of changing export regulations, specifically for chemical residue levels. “Our list of suitable chemicals was and still is shrinking due to global regulations and the green movement,” Mike says. “Consumers are looking for residue-free fruit, and we had to find a different way of doing things.” Fruit destined for export is batch-tested five days before picking, and Mike felt that moving to natural pest and disease control in the form of “worm tea” would minimise the risk of residue on the fruit, increase its nutritional value, and reduce chemical use and withholding periods.He contacted private consultant Hennie Eksteen for advice on vermiculture, and partnered with vermiculture specialist Poerie Coetzee to manage it. This left Mike himself free to concentrate on orchard management. “I was initially concerned that salmonella and E. coli contamination from feedlot manure and chicken litter we used as compost base came through in the testing,” he admits. “But we tried the worm tea in selected apple blocks and the results were perfect. The earthworms destroyed all pathogens in the manure, giving us the confidence to freely use compost tea.”

The vermicomposting process
Bacterial activity flourishes even in colder periods like early August and the worms actively work the compost, debunking the notion that worm farming and worm-tea fermentation is only effective in a warmer climate.
During vermicomposting, the organic compost material must be well decomposed before the red wriggler worms (Eisenia foetida) are introduced. To aid decomposition, the compost is turned mechanically and the moisture content is checked and supplemented as needed. The worms are added when the compost is soft and crumbly, with a clean earthy smell.Concrete blocks on the ends and down the centre support the compost rows. A thick mulch layer covers the mounds, insulating the temperature-sensitive microbial and vermicomposting processes and retaining essential moisture. Hail nets covering the rows protect the worms from birds.Texture and smell determines when the vermicompost is ready. At this point, additional compost is added as food on the side to attract the earthworms away from the vermicompost, which consists mostly of worm castings. The castings are removed and used as straight fertiliser, or are further processed into foliar and soil-feed teas.

Foliar and soil-feed teas
“Foliar-feed tea requires an anaerobic process,” explains Mike. “We mix the earthworm castings with water, molasses, ground lucerne and fishmeal, and brew the mixture in 1 000â„“ vats for three weeks. When it’s ready, we dilute the tea with water and use it as a foliar feed, sprayed at 80â„“/ha.”Likewise, converting the solid material in worm castings into a liquid enables a practical, accurate and uniform application of soil-feed tea throughout the orchard. Soil-feed tea is made aerobically by pumping a large volume of air through it for up to 24 hours. Once the correct microbe population is reached (established by microscopic examination), the tea must be applied undiluted at 200â„“/ha within a few hours before the aerobic bacteria die from a lack of oxygen. Follow-up irrigation further washes the tea into the soil.The total cost of foliar and soil-feed tea production and application is around R12 625/ha per season. This will decline in time as the orchard health improves and less spraying is needed.

Mulching – retaining a natural balance
“In nature, fruiting trees are part of a complicated ecological system, existing in symbiotic relationships with the fauna and other flora to sustain a healthy fruiting cycle,” says Mike. He’s concerned about the consequences and economic sustainability of a system of constant harvesting, with synthetic chemicals as the only inputs. So, mimicking nature, he scatters tree pruning clippings and other plant residue around the base of the trees to eventually decompose and form mulch. “We use nine 1,5m-diameter round bales of wheat residue to every 200m of tree row,” he explains. “This equates to 104 bales, or 26t of dry plant material, per hectare, and lasts for three to four years. Nothing is wasted.”The mulch, besides retaining moisture, feeds the bacterial processes stimulated by the soil-feed worm tea. Mike points to the contrast between mineral soil and the rich organic matter resulting from earthworm activity. “The earthworms manage the environment for me,” he says. “The soil is moving towards a natural state of balance (homeostasis) without chemical fertiliser.” He estimates that this production system needs one-third less irrigation water. “The savings are significant.” Mike was astonished when he first saw the increase in root growth as a result of the mulch and soil feed. “This increased nutrient uptake has resulted in healthier, stronger apple trees.”

A competitive advantage
“Quality counts. The market is prepared to pay for an apple that tastes better and, more importantly, lasts longer,” says Mike. Mulching with worm tea had precisely this effect, increasing demand for Clan Leslie apples from clients in Africa, where the cold supply chain isn’t as advanced as other export markets. “The local informal market is massive, and is prepared to pay premium prices for quality fruit that will last,” he explains. Although being situated in the south-eastern Free State gives Clan Leslie a three-week harvesting advantage over its Cape competitors, the unseasonal heavy frosts are a problem. Mike warns that worm tea is no silver bullet, and that balancing the soil is a slow process. Over the last five years, he has recorded an average increase from 8 Brix to 12 Brix in his plants, correlating directly to frost resilience. An SMS early warning system notifies him to irrigate when air temperature drops below 5°C. Incorporating earthworms has increased yields from 50t/ha to 75t/ha in Pink Lady apples, and by 15t/ha in other varieties.

The path towards more sustainable production on the 66ha apple orchard constantly challenges Mike. “In the future I would define myself increasingly as a carbon farmer who produces apples,” he says.
Based on the success of the worm tea in the orchards, he aims to produce low-carbon-footprint apples with a superior nutritional value. Worm tea has been so successful in the apple orchards that he intends to expand it to the other Clan Leslie enterprises.
Contact Mike Leslie on 082 770 0306 or e-mail [email protected].     |fw 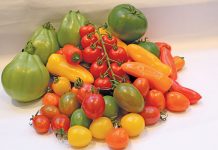 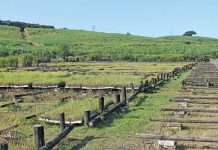