Argentina’s commercial crop-farming sector is a world leader in no-till practices, ensuring that the country can be confident of a sustainable and productive agricultural future.

Argentinians are passionate people and their love of the tango can be compared to the country’s crop farmers’ passion for their siembra directa (direct seeding), commonly known as no-till. Argentina implements no-till cultivation extensively throughout the country.

María Magnelli from the Argentina Association of Direct Seeding Producers (Aapresid), who is based in Rosario, says that Argentina’s use of no-till stems from a need to utilise land more productively and sustainably to feed the ever-growing demand for food.

“It would be easier to crop more land to meet this demand,” says María. “Unfortunately, land is often ecologically sensitive. For example, parts of the Amazon Rainforest have been cleared for agriculture and this has had very negative effects on the environment. A better option is to achieve greater yield from lands already under production.”

Technological development
María explains that the development of important technologies since the 1960s, such as genetically modified (GM) crops, has dramatically increased yield across the world. The most well-known GM technologies are Roundup Ready and Bt traits.

“In Argentina, the public has long seen our farmers as destroyers of the environment. Aapresid is working to change this perception,” Mar?a says.

Soil composition
Argentinian soil is typically loamy in the east (about 5% organic matter [OM] content) becoming increasingly sandy (1,5% OM content) towards the Andes Mountains and the Chilean border in the west. The country’s average annual rainfall ranges from about 1 200mm along the east coast, gradually decreasing to about 500mm closer to the Andes. Most rain falls between spring and early summer. Argentina’s warm weather crop production period ranges from about 270 days in the north to about 180 days in the south. Early and late frosts are common in the latter regions.

María explains that crop production in Argentina has changed dramatically since the mid-nineties, when farmers increasingly began using modern agricultural technology. This included no-till and precision agriculture, and using silo bags, fertiliser and seed inoculants. Nearly all farmers at this stage were already using pesticides and planting GM seed.

Today, almost all Argentina’s crop farmers have implemented no-till practices. “With the introduction of these technologies, Argentina’s crop yield has increased exponentially,” she says. “Existing silo infrastructure couldn’t store all the grain, so silo bags were introduced to increase storage capacity.” In 1993/94, Argentina’s farmers were cropping 17,8 million hectares to produce 40 million tons of grain. In 2010/11 farmers cropped 33,9 million hectares (a 90% increase), producing 101,3 million tons of grain – a 153% increase.

Improved production environment
”Conventional tillage requires farmers to adapt their soil to the crops they are growing. But sustainable agriculture principles adapt the crops and management to work with, and improve, the existing production environment,” explains María. The soil is not tilled, but is always covered with crop residue. With proper crop rotation, the plant roots break up the soil, preventing soil compaction.

“When converting from conventionally tilled soil to no-till, we first use a para plough to break up the plough pan. But it’s important to allow the soil time to re-establish a healthy equilibrium once it has been converted to no-till,” María explains. No-till planters manufactured in Argentina are designed through ongoing collaboration between manufacturers and farmers, and are ideal for local conditions.

Carefully managed crop residue
In Argentina, the grazing of crop residue is carefully managed, resulting in a thick layer on the soil surface. It is therefore necessary for Argentina’s no-till planters to cut through and slightly separate the residue to place seed and fertiliser accurately in the soil. The thick crop residue layer enhances water infiltration, decomposes to improve the soil’s organic matter content, and significantly inhibits weed growth.

Soil composition
In contrast to South Africa, where it is often essential to add lime to the soil before converting to no-till, Argentinian soil has an average pH of 6. Calcium carbonate is needed only in a few areas to reduce acidity. According to Mar?a, a study found that the organic nitrogen (N) level in the top 10cm of soil had increased to about 260mg/100g in an area where no-till had been practised for 10 years.

This increased from about 135mg organic N/100g when the soil was previously conventionally tilled. In fact, down to a depth of 60cm, the 10-year no-tilled soil consistently contained more organic N than when conventionally tilled.
She explains that in the warmer north of Argentina, crop residue decomposes faster, while in the cooler south the rate is slower.

“To ensure a balance between having soil cover throughout the year and having good soil organic matter content, no-till farmers in the north set their combines to chop the residue into longer pieces, while farmers in the south do the opposite,” she says.

Argentinian no-till farmers say that soil porosity is essential for good soil health. Crop roots, soil micro-organisms and earthworms are used to improve porosity and develop a healthy equilibrium in the soil. Increased porosity also improves air and moisture penetration into the soil. Every season, no-till farmers rotate their planting direction by 30° from the previous direction to spread crop root growth across the land.

Improved water utilisation
According to Aapresid literature, no-till cultivation’s good soil cover retains water better, because runoff and evaporation are significantly inhibited. While Argentina’s crop production areas generally have a higher rainfall than those in South Africa, water remains a limiting factor to crop yield. Although soil cover can reduce soil temperature, it should not affect seed germination, Mar?a says.

“Farmers can choose a planting date to take advantage of higher soil temperatures. New seed technologies also allow farmers to choose crop varieties that are more tolerant of lower soil temperatures at planting and have different growth cycles for production flexibility. There are many crop production conditions in Argentina, so no-till farmers in different areas use technologies and management techniques best suited to their specific conditions,” she says.

Don’t burn money
In Argentina, no-till farmers never burn their crop residue because, as Mar?a explains, “to them, burning residue is burning money”. Livestock utilisation of crop residue is also carefully managed to prevent hoof compaction and over-utilisation of the soil. Due to the greater risk of compaction, farmers exclude livestock from lands when the soil is wet.

“Argentinian farmers can never have too much soil cover as long as they have a no-till planter that can plant seed through the cover at a uniform rate and soil depth. Row cleaner attachments on no-till planters are used in lands with thick soil cover,” Mar?a explains.

“Many Argentinian no-till farmers rotate maize and soya beans as summer crops,” explains Mar?a. “In winter they might plant wheat or a green cover crop, or leave the soil fallow and covered with residue from previous crops. Different crops not only provide different quantities of soil cover, but their root systems are different, which have different effects on the soil.”

“A study of a particular area found that the quantity of organic carbon in the soil increased slowly in the first two years of no-till, where the crop rotation consisted of a winter wheat, summer soya beans, a winter cover crop, and summer maize,” explains Maria.

“It then increased significantly over the next four years. From about the sixth year, the organic carbon level in the soil started stabilising. These trends may not be exactly the same elsewhere, but they give an idea of what no-till and crop rotation can achieve. In Argentina, maize is the best source of organic carbon for the soil.“

An added environmental benefit of no-till is that it is good for carbon sequestration. “No-till can reduce a cropping enterprise’s use of fossil fuels by up to 40% because it requires less mechanisation than conventional tillage. Research has found that 1l of fuel in conventional tillage can produce 50kg of grain, while under no-till conditions it can produce 123kg of grain,” she says.

Some of the main cover crops planted in Argentina include oats, hairy vetch and teff grass. These are killed off with a herbicide such as glyphosate before a primary crop is planted into the residue. An important management consideration is to kill the cover crop before it starts using too much soil moisture, to the detriment of the primary crop that follows.

“In Argentina, no-till is no longer just an alternative system for crop production. It has become a life philosophy for our crop farmer,” Mar?a stresses. “No-till allows previously marginal soil to produce food and fibre. Argentina and a number of other South American countries are ahead of the world average in no-till implementation.” 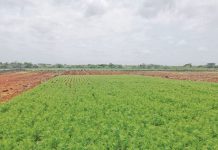 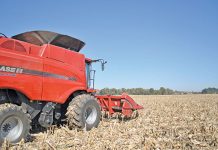