Through perseverance and applying strict business principles, Elias Pangane proved that farming could produce a viable income for him. The Hazyview vegetable and macadamia farmer spoke to Lindi Botha about the success that comes from combining passion with grit.

While growing up on a farm in Hazyview, Elias Pangane used to tend the household’s vegetable patch, and gradually he developed a passion for farming.

However, turning it into a full-time enterprise was never an option as his family believed there was no money in farming. As a result, Pangane went into construction after school.

“I never thought I’d be where I am today, running two successful farms. But I’ve realised that if farming is in your heart, you’ll make it. Initially, it’s a struggle; nothing is easy when you start, but you must persevere,” he says.

Pangane’s opportunity to farm full-time came in 1996, when he returned to the family farm to take over the cattle business from his father, who was retiring. His intention was to continue with his construction business and merely oversee the cattle.

But recognising the potential that lay in intensifying the farming operation, he started clearing the land in 1999 to make way for vegetables.

Success did not come easy and Pangane found himself knocking on many doors to find the knowledge to improve his yield and, more importantly, find a market.

“I learnt a hard lesson with the vegetables when I first started. I didn’t have a market, so I sold from my bakkie on the side of the road. I had good- quality produce, but couldn’t get a decent price. Tomatoes don’t have a long shelf life, so what I didn’t sell I had to throw away after two days.”

Pangane reached a turning point in 2011, when Freshmark started buying his vegetables.

“For the first time I realised there was money in farming and I could make a living from it,” he recalls.

“But I also grasped that the secret to farming successfully is to do it properly by ensuring that the basic business principles of capital, knowledge and market are in place. If you don’t have those three things you’ll fail, and everyone who sees you will be put off farming.

With the exception of the butternuts, the vegetables are planted and harvested throughout the year, with production split into a six-month cycle per farm.

Each farm has its own packhouse, so when the harvest is completed on one farm, Pangane moves his workers to the other, and harvests and packs there while the first farm is replanted. In total, 6ha are planted to vegetables every year, and this area is split between the various crops.

The beans stay on the land for six months before being replanted in the next land. The yield reduces over time, but Pangane feels that the cost of adding fertiliser is not always justified.

The beans are planted in rows of four plants per row and about 1,5t are despatched to Freshmark every week.

The tomatoes remain on the land for six months before being rotated. Between 6t and 10t are sent to market weekly. Pangane notes that the age of the plants also has an impact on yield, with tonnage decreasing as the plants age.

Chilli plants deliver 600kg a week, and are rotated every three years. Butternuts are harvested only once before the plants are replaced. Pangane plants 5ha to butternuts each July and yields about 48t/ha in October.

The vegetables are drip-irrigated using water from the Sabie irrigation canal. Fertilisers are applied based on the results of soil analysis carried out on each land before planting a new crop.

The farms are Global GAP-certified. This is a lengthy process initially but once it is in place, it is easy to maintain, says Pangane.

The vegetables are harvested each Monday and packed in the on-farm packhouse on Tuesday.

The main challenge on the farm is the sizeable labour component.

“I require about 30 people just to pick tomatoes, and another 15 for the chillies and green beans. During macadamia harvesting, I need an additional 20 workers. This is a lot of people to manage, and the minimum wage has made a big impact on profit margins.”
Pangane believes in training women in leadership roles, and both his farm managers are female.

“Women are reliable, and when given instructions, they follow them to the letter. They’re consistent and show up for work,” he says.

He had problems due to some men refusing to take instructions from the women. “I explained to the men that if they didn’t listen to the women it was as if they were not listening to me.”

Macadamias
In 2007, Pangane expanded his vegetable business to include macadamias after receiving 200 trees of the Nelmac variety as part of a government programme to encourage farming with this lucrative nut.

After seeing that the trees flourished and provided a good income, he expanded this component of the farm to the current 40ha, with more trees added annually.

The expansion process entails planting the macadamia trees in between the rows of vegetables so that the land still provides a cash crop before the trees start producing a harvest. Once the trees have reached four years of age, the vegetable production is moved to another land.

In addition to the Nelmacs, Pangane has added the A4 variety for its good crackouts, and Beaumont for its higher-than-average yield.

Initially he planted at a spacing of 10m x 6m, but has since reduced this to 8m x 4m; this has ensured a higher yield per hectare while still providing sufficient space for sunlight and for tractors to move through the orchards. Pine trees are planted in between the blocks as windbreakers.

The trees are micro-irrigated. Consultants work out a fertiliser and crop protection programme for the macadamias, and Pangane calibrates his spraying machines regularly.

“This is very important because the inputs are costly. If your machines are not spraying effectively, you don’t get the right results. It’s also important to choose trusted consultants from reputable companies.”

He says the secret to a good macadamia crop is to follow the spraying programme and do adequate scouting in the orchards.

“The programme is just a guideline; we need to know what’s happening in the orchards as well. Every month, before we spray, we scout to see what the actual pest load is. Otherwise we might end up just spraying and it’s not always necessary at that point.”

He adds that his location is beneficial as he is the only macadamia farmer in the area. “This means the pest load is lighter as there aren’t several farms for the pests to live off. I also don’t need to worry about my neighbours’ spraying programmes and coordinating them with mine, as would be the case if I had macadamia farmers as neighbours.”

The Nelmacs are harvested in March and the A4 and Beaumonts in April or May, depending on their maturity. The nuts are taken to a processor to determine their maturity as farmers are penalised for delivering immature nuts.

Increasing yield
Pangane receives an average yield of 2t/ha as the trees are in various stages of maturity. Once all the trees are in full production, this figure should at least double. His average crackout of 34% sound kernel recovery is on a par with the industry average.

When it comes to finding a market for the crop, he smiles; this, he says, is the easiest part.

READ Dry beans: learn how to get into the business

“The nuts are so much in demand that the market finds you! I have a lot of confidence in the macadamia industry, and expanding this component is the best thing I could have done.”

Adverse weather conditions are, however, cause for concern.

“At the end of 2017, hail caused huge damage to my crop. If I’d had insurance it would have softened the blow financially. As a macadamia farmer, I’ll need to have insurance in future.”

Pangane believes his success is due to his passion for farming.

“If you love something, you seek knowledge about it. I speak to everyone I can to learn as much as possible about farming. I phone the other farmers in the area if I have a problem and so I learn as I go along. I read up on whatever I can to improve.

“I also have to teach my staff, so I need to be as informed as possible. And practice makes perfect; the more involved you are on the farm the better.” 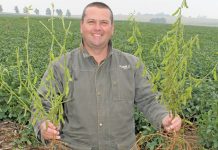