Pecan farming is still in its infancy in South Africa, but with the global demand for nuts increasing, more producers are seeing opportunities to diversify their farms with pecans. Lindi Botha spoke to seasoned Gauteng-based pecan farmer Albert Bouwmeester Jnr about how he gets the most from his pecan orchard.

As far as long-term investments go, few crops require more patience than pecans: a producer has to wait 12 years before enjoying a return on investment. Albert Bouwmeester Snr therefore saw pecans as an ideal retirement project and established a 21ha orchard on the farm Elandsdraai in Cullinan, Gauteng, in 1975.

As his retirement drew near, however, he found the winter harvesting period tiring, so he increasingly involved his son, Albert Jnr, in the activities of the farm. The latter’s energy and enthusiasm for the enterprise saw him buying his father’s stake in the business, expanding the orchards, and erecting processing facilities.

Today, Bouwmeester Jnr has 55ha under pecans and, every year, processes and markets 350t of these nuts, comprising his own crop and those of other farmers in the area.

Choosing the right variety
According to Bouwmeester, there are orchards in the US that are flourishing after more than 100 years.

“This is due to good management. You need to do your homework and get your cultivation practices right from the start if you want to succeed. This means ensuring that the nursery supplying the plants is accredited, that you inspect the plants before buying any, and that you select a cultivar based on sound information.”

He cautions against planting varieties that have not been tried and tested in the area.

“Most plant material is sourced from the US and then propagated by local nurseries. It’s best to carry out your own trials before investing in many trees, only to discover a few years down the line that the cultivar selection was wrong.”

Bouwmeester plants Wichita, Desirable, Choctaw and Barton varieties, with the last two performing the best. “Wichita does well, but is less tolerant of frost, so it shouldn’t be planted near valleys or wetlands, where the trees become highly susceptible to pecan scab.”

Climate is the most important factor when considering whether or not to plant pecans.

The trees require some chilling in winter and do better in areas that receive frost, as it encourages more uniform growth in spring, which in turn helps to ensure more uniform pollination.

Irrigation and fertilisation
Pecan trees’ water usage is hotly debated, and the industry is undertaking studies to establish the true water requirements. While 450ℓ of water is applied per mature tree per day in season on Elandsdraai, some farmers apply as much as 900ℓ/ tree/day in parts of the Northern Cape.

Bouwmeester uses micro-irrigation, and his watering regime starts in August and continues until harvesting begins in May. Between May and July, the trees are irrigated every two weeks.

Soil analysis is carried out every year and fertiliser is applied accordingly. Leaf analysis is conducted throughout the season to determine the frequency and composition of foliar applications. Bouwmeester pays special attention to zinc and boron levels, which play a crucial role in tree health.

The orchards receive compost made from pecan husks, wood chippings, lime and chicken manure, a combination that promotes soil health and aids the development of beneficial micro-organisms. Bouwmeester also checks phosphate levels regularly; if they are too high, he excludes manure from the compost.

The compost is applied early in the season so it has time to break down before the harvest and does not interfere with nut collecting. The older trees receive one application, while the younger trees get two.

The nuts are shaken off the trees mechanically, and collected by a team of workers. Bouwmeester’s mature orchards yield 2,5t/ha, with a kernel recovery of around 54%. The average kernel recovery in pecans is 50%, and can go up to 60%.

Shaping the trees
Pecan trees are quick growers, and left on their own will produce ample shade but inadequate yield. Bouwmeester therefore pays close attention to tree spacing and pruning to get the right balance between tree growth, sunlight and yield.

Elandsdraai’s pecans are planted at a spacing of 9m x 9m x 9m to form perfect triangles, allowing for optimal light management once the trees are fully grown. Bouwmeester aims for sunlight coverage of between 50% and 60% of the orchard floor.

“If you don’t achieve that, the lower branches, and all those not receiving any sunlight, start dying off. We regularly prune and shape the trees into hedges in a north-south direction to enable the sunlight to penetrate as much of each tree as possible.”

Pruning is carried out mechanically at a 15° angle, at a height of between 1,8m and 9m. The upper part of the tree is pruned at a 45° angle.

“To determine the desired tree height, the rule of thumb is to follow tree spacing. So, if trees are planted 9m apart, they should be no taller than 9m. I also prune nearly two-thirds of the length of the side branches, keeping them quite short.”

Because pecan trees bear nuts on branches that grow out the previous season, Bouwmeester prunes only one side of a tree each year.

“This way, we still get a harvest every year, and the alternate-bearing characteristics of the tree are evened out. If we pruned the entire tree, we’d have to wait a whole year for the new shoots to grow and produce a harvest.”

Bouwmeester notes that trees have to be pruned from an early age to maintain a hedge shape.

“This means you avoid having to do heavy pruning on trees that have grown too big and are limiting the sunlight. If you start pruning too late, you would already have lost the lower branches that died from lack of sunlight. You’d also end up with very thick branches that need to be sawn off, which would reduce yield.

“Ideally you want a central leader branch that lets more light in, instead of a spread-out tree with many thick branches. The former is easier to manage using tree shakers, and sprays penetrate the tree more effectively. It also makes for better hedging.”

Pecans are fast growers, and pruning them can be a never-ending headache. This is not only because of the time it takes, but because it reduces yield.

“When a big tree is pruned, it goes into shock and expends energy on vegetative growth to replace the sawn-off branches, rather than on producing nuts.”

To solve this problem, Bouwmeester applies the growth regulator Cultar, which is a controversial method. It inhibits vegetative growth, so the tree focuses its energy on nut production instead. Cultar is a soil drench that is applied around the tree trunks in November, every three years as needed. He applies it at a rate of 8mℓ/tree, mixed with 5ℓ of water. Irrigation and rain then carry it to the roots.

“Not everyone in the industry agrees with its use, as it stays active in the soil for three years, but I see it as an extra tool in my arsenal,” he says.

“Pecan scab, in particular, is a problem, as is shot hole borer. The list of products the industry is allowed to use is also limited, and it’s a struggle to get the chemical usage extended to pecans.”

Another problem that Bouwmeester has struggled with, and which has proved insoluble so far, is a shortage of zinc in the trees.

“The crown of the tree is affected first, causing yellowing and curling of the leaves. With pecans, you farm leaves; the more that grow on the tree, the better the harvest. When leaves start yellowing and dying, the entire tree eventually dies.”

Bouwmeester applies a zinc foliar spray with the first flush to prevent the yellowing from starting. If the application is delayed and the leaves have begun to curl, it is too late.

“But in terms of solving the problem completely, there are no answers. Applying more zinc doesn’t help, as there seems to be a secondary problem where something else is preventing the trees from absorbing the zinc.”

Still, he is positive about the future of the pecan industry. While production globally is increasing, consumption is following suit.

“Special diet trends such as banting have done a lot to boost nut consumption, but we need more marketing to increase it even further. It’s a positive that few Europeans are familiar with pecans, which means it’s an untapped market, but if we don’t tell them about pecans, they won’t seek them out.

“At this stage, the US is the biggest producer, and fortunately they consume most of what they produce. But they also send a lot to China, which is South Africa’s biggest market, so we end up competing with the Americans, and ructions in their trade relationships have an impact on the prices we receive.” 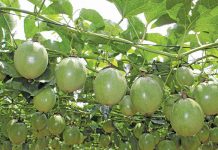 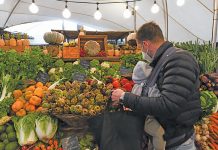 The proper fencing to keep sheep and goats safe