Home Crops Vegetables Doing it ourselves

Many of us are quick to find fault in the business sector where we operate, but we’re slow to implement changes.

Instead, we point a finger at government or some other authority and demand solutions from them. When it comes to SA’s fresh produce markets, there’s a veritable army of ‘wise men’ – but very few take their own advice and try to make the improvements they’re advocating. Fortunately, there are exceptions. One is Project Rebirth, launched in late 2011 by the Institute of Market Agents of SA (IMASA).

It’s been addressing issues of management, infrastructure and co-operation (or lack thereof) on a number of markets with considerable success.

Themselves
IMASA realised that if it wanted to set things right within its own sector, it would have to do it itself. There’s no shortage of reports commissioned over the years, which are loaded with proposals on how to ‘improve’ markets, but these are gathering dust wherever they may be lying. When dealing with problems, it is, after all, standard bureaucratic practice to blow the trumpets, appoint a commission to investigate the matter, make the findings public and then forget about them.

Because IMASA is doing something concrete, Project Rebirth has found strong allies in industry organisations such as Potatoes SA (PSA), the Tomato Producers’ Organisation and the Agricultural Produce Agents Council. PSA has its own sector-specific project focused on the markets and in parallel with Project Rebirth, this is becoming a strong driving force for change and improvement.

Progress
So far nine markets have been engaged. Not only are market management and market agents involved, so are the municipal officials who make decisions about the markets. The big challenge is to ensure everyone remains committed, as enthusiasm filters away when it comes to actually doing some work.

But usually this process can be arrested by the project’s task team and things set back on track. All the same, one market seems to have thrown in the towel and its prospects don’t look good. For most of the others, however, the DIY approach seems to be working well and taking them forward. 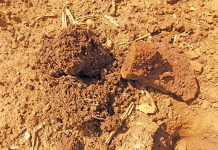