I wrote a column on powdery mildew in peppers some months ago, but would now like to address this important subject more fully.

Leveillula taurica, the powdery mildew that attacks peppers and more than 1 000 other species is a unique fungal disease in that it is an endoparasite. It grows within the leaf and not on the leaf as do all other forms of powdery mildew. Aside from attacking the genus Capsicum, it is also a serious disease affecting tomatoes.

Many growers fail to recognise the disease as powdery mildew on peppers and tomatoes as the signs are different to other powdery mildew species, where the white fungus is highly visible. Instead, yellowish blotches appear on the upper side
of the leaf, while fuzzy fungal growth is not always visible on the underside; dark brown speckles or blotches appear here instead.

READ: How to grow green peppers

Under favourable conditions, however, a fuzz may well be visible, and with particularly heavy infestation, it may occur on the upper leaf surface as well. Although mildew is usually associated with moist conditions, the opposite is true of L. taurica. I have noticed – at my facility and on farms I have visited – that when peppers are grown both outdoors and under plastic, the disease is more severe when they are under the plastic, even when the humidity level is the same. This puzzled me for years.

One of my clients who grew peppers under plastic struggled with L. taurica every year, spending a fortune on combating it. One year, after using the dripper lines for some time, he experienced blockages in them. In desperation, and to minimise the damage, he brought pipes into the plastic house and used sprinklers to irrigate. This not only relieved the drought-stricken plants but resulted in substantially less powdery mildew.

No explanation
A few years later, another client had the same problem and resorted to the same solution. Once again, the powdery mildew almost disappeared. This now tied up with the observation that the outdoor peppers exposed to rain and dew had very little or no mildew, but I still did not understand why. I even surmised that the water might have washed the spores off the plants!
Another client intending to erect a few hectares of tunnels for pepper production discussed irrigation with me.

I suggested he use dripper lines, but also install a sprinkler system to switch on from time to time, both to drench the leaves and cool the plants on hot days. I could not explain to him how this worked; I could only reassure him that it did. My client was rather dubious. After contacting tunnel irrigation experts, he had overhead misters installed just under the plastic. This turned out to be a mistake.

The misters were switched on at intervals during the heat of the day. The fine droplets from the overhead sprinkler system resulted in quick evaporation and some cooling, but caused mineral deposit accumulation on the leaves. This prevented sunlight from reaching the leaf surfaces and caused most pest control products to be immediately neutralised on contact. In addition, the powdery mildew was as bad or perhaps worse than ever.

At this point, I reminded him of the other two farmers who used sprinklers in their tunnels with immediate results.

Larger droplets to wet foliage
Using the existing infrastructure, my client replaced the fine sprinklers with much larger droplets to wet the foliage properly. In one section of a tunnel, however, he ran out of sprinklers and decided to change the sprinklers at a later stage. When the crop was about halfway through its cycle, the section without the sprinklers became very badly infected with powdery mildew. The rest was clean and healthy and the crop went through to winter without any major damage.

The two photographs above show the difference. Each section was planted with the same variety on the same day, yet the difference in growth, yield and quality is quite substantial. As a result, the farmer now no longer considers powdery mildew a threat to his production.

More active
This was all well and good, but I still did not have an answer for it. Having already read most of the existing literature, I decided to use the Internet to seek out the latest research. Virtually all the articles I came across confirmed that L. taurica is much more active at high humidity. Moreover, there is already enough moisture in the spores to enable them to germinate without free water.

Then came the punchline. An article stated that, when exposed to free water, the spores would burst. The writer did not seem to realise the importance of this discovery to pepper farmers. Also, I have never come across a farmer or chemical representative who has had any idea that this is the case.

It is estimated that pepper production in the US is 15% lower due to powdery mildew, with some farmers having far higher losses. As this is the same pathogen that causes powdery mildew on tomatoes, one wonders what can be done to reduce damage to this crop as well. Wetting spores on the tomato leaves – causing them to burst – would surely be just as effective.

This invites the question of why more research is not being done on the practical aspects of using sprinklers to reduce the severity of the disease or even prevent it altogether. Research could determine how much water is required per application, how frequent the applications should be, and what is the most effective type of sprinkler system to use in tunnels. It would seem that not much water is required per application to be effective, but it would be useful to know how long the spores must be exposed to free water before they burst.

The timing could be set to avoid increasing the risk of other diseases associated with free water on leaves (more applicable to tomatoes than peppers). Bacterial spot is one hazard associated with wet conditions on peppers, but is not usually a problem unless introduced through infected seed. In addition, there are resistant varieties.

Many farmers in humid areas opt for drip irrigation on peppers because it is widely believed this will reduce the likelihood of disease, especially powdery mildew. By doing so, they are actually promoting rather than reducing this disease!

Early treatment is always better
Powdery mildew is most active at 85% humidity, but can still infect leaves at lower humidity. The temperature range is 18°C to 33°C, with 20°C being optimum. After landing on a leaf, a spore sends out a root, which enters the leaf through the stomata (pores). The fungus develops unseen for 18 to 21 days before the fruiting bodies emerge from stomata on the underside of the leaves.

From above, light patches are visible on the leaves. On the underside are the light and dark patches – and perhaps the ‘fuzz’ – already described. The leaves then curl upwards and drop readily. Liberated spores move through the air to other sites. Young plants and leaves are fairly resistant, but when leaves mature they become highly susceptible to infection.

Loss in yield is in direct proportion to the percentage of infection. When the disease has entered the leaves, contact fungicides will have no effect other than preventing new infection. Systemic fungicides can help, but results are far from dramatic. Speak to your pest control advisor on which products to use in your area. It is always better to catch this disease in the early stages as more spores in the air mean a greater infection rate.

You can use contact products as protection to slow down initial infection. These are best applied before symptoms become visible. Wettable sulphur is one such product – apply at 1kg/ha to 2kg/ ha at weekly intervals for up to six applications.

Bicarbonate products are also useful, with potassium bicarbonate being slightly better than sodium bicarbonate, although not as readily available. Use either product at 5g/l of water with a wetting agent. A very thorough spraying is necessary; the entire plant should be wet to the point of dripping. Israeli researchers found this to be more effective than commercial systemic products.

I suggest using bi-carb and sulphur as preventative measures and then later turning to systemic products. But if you can wet the leaves, this may still be the best option. 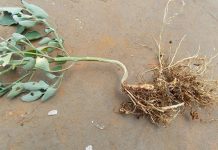