There are now two species of powdery mildew which attack tomatoes in South Africa. The most common is Leveillula taurica. The spores don’t need water to germinate and it is therefore a problem in greenhouses and in lands in dry areas or seasons.

Some moist areas hardly get the disease. I remember an interesting incident that occurred many years ago while I was visiting tomato growers with a colleague. The first couple of farmers we saw told us they were having a huge problem with the Alternaria fungus that year and couldn’t control it with the usual remedies. After the third farmer said the same thing, I asked to see his crop, where I immediately recognised the so-called Alternaria as powdery mildew.

As the farmers weren’t used to this disease in their area, they’d assumed the symptoms signalled the onset of Alternaria. Not even the local pesticide representative had realised it was mildew. One of the problems with the L. taurica form is that there’s no conspicuous white mildew that most farmers associate with the disease. Thus it’s easy to assume it’s not powdery mildew. The symptoms first appear as irregular yellow patches on older leaves which later start dying from the centre. At this stage the disease can be confused with Alternaria, but the concentric circles associated with the fungus are absent.

Lower leaves
Turn the leaf over and you may find some ‘fuzziness’ under the yellow patches, but this isn’t always obvious. Most of the activity occurs within the leaf. The disease may attack one land and leave another relatively untouched, depending on climatic conditions and stage of the crop. It tends to start on the lower leaves and plants are much more susceptible under the burden of a heavy crop or as they get older.

Very often there aren’t enough symptoms to justify control measures and you need to carefully monitor the situation and rely on your experience to decide on the course of action to be taken.

Other form
The other form of powdery mildew found in SA is Oidium neolycopersici. First discovered in England in 1986, it has rapidly spread around the globe since then.  In contrast to L. taurica, this form of the disease is very easily recognised as powdery mildew, as conspicuous white patches form on the surface of the leaves. O. neolycopersici is more prevalent in glasshouses or plastic enclosures, and tends to become a problem later in the season and when sunlight loses some of its intensity.

Unlike L. taurica, it starts all over the plant at once. Its development is much more rapid and destructive, and it needs attention as soon as it first starts to develop. Like L. taurica, it doesn’t need water to develop – and in both cases the availibility of water can actually reduce the disease. With O. neolycopersici, fungicides need to be applied as soon as the first symptoms develop. However, in my experience, it’s easier to get under control than L. taurica.

Control
Systemic products used for powdery mildew in general can be used for both O. neolycopersici and L. taurica. If organic producers are aware the disease may occur, they can spray wettable sulphur as a preventative measure before the onset of symptoms. Another option is to use bicarbonate of soda (baking soda). In this case you would use 500g of bicarb in 100l of water with a non-ionic wetting agent.

To be effective, the plants have to be thoroughly wetted to the point of run-off and the leaves should look shiny just after spraying. I’ve found this option to be most effective. Spraying tomatoes in a protected environment does increase the risk to the spray operator, so it’s advisable to use an effective product which is totally non-toxic. 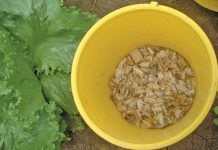