Although an animal with hoof problems may be able to function normally, malformed hooves can have an impact on production and performance. Annelie Coleman spoke to cattle farrier and hoof specialist, Johan Combrink, about problems encountered and how to deal with these.

The hoof protects the foot, and its outer structures are the first line of defence against foreign objects and infection.

Sound hoof management procedures can greatly reduce hoof problems in all types of animals, including cattle, and a well-organised hoof care programme will contribute to the long-term sustainability and profitability of any concern, he says.

He has also branched out into the management of game species’ hooves, a first for Africa.

Background
Johan, who trained under well-known Brahman breeder, Manie Maritz, says that many conditions can be prevented with effective hoof trimming.

“My moveable chutes allow me to immobilise the animals quickly and effectively for easy access to the feet. It means less stress for the animal and creates a safer working environment for the farrier,” he says.

According to Johan, hoof health is affected by various factors. In a hot, dry climate, for example, hooves can become hardened, resulting in brittleness. Under wet conditions, hooves can become softened, which could contribute to bacterial infections and penetration by foreign objects.

“Whatever the reason, hoof health markedly contributes to overall herd health. A cow with painful feet in an extensive farming concern will find it painful to walk long distances to [the veld to graze], resulting in a loss of condition.”

This could cause her to lose weight rapidly, affecting milk production, and, in turn, making it difficult for her to successfully care for a calf. A good hoof treatment programme will prevent this.

Basic hoof structure
Johan stresses that it is important for a livestock owner to understand the basic structure and anatomy of the hoof. Cattle are cloven-hooved animals, with the hoof consisting of two digits: the outer and the inner claws.

If these grow too long, they must be trimmed to improve the animal’s walking ability.

However, if the hoof has been left for a considerable period, the trimming must be done in stages to give the hoof time to heal in between. (Blood vessels grow outwards as the claws develop.)

This extended cutting process wastes time and puts unnecessary stress on the animal. If the hooves are maintained regularly, two trimmings should be sufficient.

Cracked hooves call for immediate action. Horizontal, as well as vertical, cracks can occur. Moreover, small cracks can develop rapidly into large ones, markedly restraining an animal’s movements and causing pain and lameness.

In addition, cracks can indicate problems in an animal’s diet, genetic makeup or overall health. Large cracks should be treated quickly to prevent complications, such as disease or lameness in the advanced stages.

“I’ve found that cracked hooves often indicate a lack of biotin or zinc, so providing these elements could prevent future cracks,” says Johan.

Walking difficulties could also indicate foot rot, or an abscess or wound on the hoof. Foot rot causes swelling in the tissue where the hoof is attached to the foot. In chronic cases, the hoof could loosen. This disease can be prevented by inspecting hooves regularly.

Corkscrew claw
Johan explains that cattle have been bred to walk relatively long distances to and from grazing areas. Modern farming methods, however, have resulted in cattle not walking enough, and this situation is exacerbated by the increasing use of feed supplements.

These changes have had a significant impact on animals’ general health, and have resulted in problems such as scissor and corkscrew claws.

Corkscrew claw results from the outside wall of the hoof growing faster than the inside wall, thereby pushing the sole upwards. The tip of the hoof claw is then rotated upwards and inwards. It is extremely painful and causes lameness.

Fortunately, it can be rectified through corrective trimming, which will vastly increase the mobility of the animal.

Knock-kneed
Knock-kneed animals usually have overgrown outside claws, which can also result in lameness. If viewed from the front, the knees are set too close together and the feet turn outwards, away from each other.

According to Johan, the angle of the hoof between the hip and the hock joint should be between 90° and 95°. An angle greater than this will impede walking and mating ability.

Bow legs
Bow-legged animals (see diagram) tend to ‘roll’ their feet when walking and are prone to arthritis. When viewed from the front or rear, these animals’ knees are set too far to the side, causing the toes to turn inwards.

Straight legs and sickle hocks
Straight-legged and sickle-hocked animals (see diagram) can also reduce herd productivity. In the case of a bull these problems will affect the animal’s ability to service cows.

According to Johan, the ideal angle for a herd bulls’ hocks is about 45° and 55°. Deviation from this usually indicates poor leg structure, such as sickle or straight hocks.

Sloping and block claws
Long, sloping claws or short block claws indicate that the pastern angle (at the junction of the dorsal hoof wall and the ground surface of the foot) is too great or too small, which is a possible sign of structural faults.

An incorrect pastern angle causes the hoof to wear abnormally, which affects the mobility and performance of the animal.

“No farrier can rectify or replace the genetic composition of an animal. However, in my experience, as many as 80% of hoof or walking problems in beef cattle are caused by management problems,” Johan explains.

“The correct balance between energy and protein in feed, as well as a balanced ration of minerals such as calcium and phosphorous, are essential. Minerals such as zinc and copper are valuable too. Overfeeding protein can cause abnormal hoof growth,” he cautions.

According to Johan, feeding contributes 40% to feet problems, while 20% are caused by surfaces such as cement floors or stony ground. Small, restricted enclosures contribute a further 20% of problems. The remainder of difficulties are genetic.

To reduce incidences of hoof problems, farmers should select for desirable foot and leg conformation, he concludes. 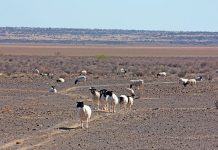