Home » Farm Basics » How to Livestock » Know your cattle: The Bonsmara breed

The Bonsmara is an outstanding beef breed, developed in South Africa.

The Bonsmara was bred at the Mara and Messina Research Stations under the guidance of Prof Jan Bonsma, who wanted to develop a cattle breed that was better adapted to South Africa’s subtropical climate.

The first calves were born in 1943. N310 (Frits) was one of the first bulls to play a role in the breed’s early development.

The Agricultural Research Council says the Edelheer line is the breed’s most dominant and sought-after line today.

Animals can only be registered with the Bonsmara Cattle Breeders Society if performance-test results are available.

No competitive showing is allowed and a breeder must register a minimum of 30 animals to qualify as a member.

Bonsmara beef is tender, tasty and succulent, with an even cover of fat.

This article was originally published in the 27 May 2011 issue of Farmers Weekly. 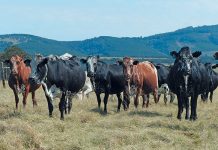