You don’t have to live on the beach to enjoy this delicious meal, since the fishy parts come straight out of the supermarket freezer. And to make it even easier, the main ingredient in the crust is breakfast cereal.

To make this fish pie for four lucky diners, you will need:

Even though the frozen hake has been filleted, check manually for any remaining bones. Select an ovenproof baking dish or skillet and smear this lightly with soft butter. Arrange the hake inside this, submerge it in the milk with the whole peppercorns, an optional bayleaf and a scattering of nutmeg.

Over medium heat, bring up the temperature until the milk in near boiling. Don’t let it boil, though! Drop the heat and let the pan and its fishy contents simmer until the fish is tender – about 10 minutes at the most. Remove from the hob, strain and retain the liquid, dump the bay leaf, break up the fish with a fork.

Now for the fussy bit. Select a saucepan and melt 50g of the butter, then add the flour. Raise the heat to medium, rev up your stirring arm and keep the stuff moving until it is a light-brown colour. Pour in the reserved milk-based liquid and keep the stirring going until the sauce is smooth.

Let it bubble gently for 10 minutes, then carefully add the hake plus the coarsely chopped smoked trout. Add a couple of sprigs of chopped dill and parsley, then season with salt and freshly ground black pepper.

Next, the leeks. Slice them thin, wash them and sweat them in butter until soft. Then add them to the main dish and reserve briefly under cover.

Now for the oaten crust on top. Dr Samuel Johnson, the 17th century dictionary compiler, had a famously prejudiced definition of oats: ‘A grain, which in England is generally given to horses, but in Scotland supports the people.’ Ignoring him for the moment, chop, then sweat, the small onion in butter.

In a food processor, hyper-chop the flour and butter or even consider doing this messy but deeply fulfilling job by hand. Stir in the rolled oats, the sweated onion, the paprika and the grated hard cheddar. Spoon this mixture over the fish in its fragrant sauce and shove the entire construction into the preheated oven. Let this cook for 40 minutes or so, until the oaten crust is firm and light brown.

Serve this oceanic blast of flavour and powerful aromas with a crisp green salad dressed with a simple vinaigrette. Open a chilled Bukketraube or an icy, refreshing lager or pilsener. 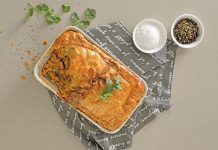