Home » Opinion » By Invitation » Increase the efficiency of livestock production

Increased emphasis will be placed on the reduction of methane gas emissions from livestock in the future, according to Prof Michiel Scholtz, ARC Specialist Researcher: Applied Animal Breeding. He says that livestock production both contributes to the problem and suffers from the effects. 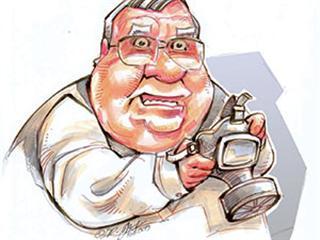 The uncontrolled, man-made release of greenhouse gases (GHG) into the atmosphere is believed to be the primary cause of a systematic, unprecedented increase in sea and surface temperatures. Of the greenhouse gases, made up of hydrogen, carbon dioxide (CO2) and methane (CH4), CO2 is by far the most abundant. However, the global warming potential of CH4 is about 23 times greater than that of CO2.

CH4 is the result of enteric fermentation of plant material in the digestive tract of animals, as well as the fermentation of their waste, such as manure, sewage and sludge. Reducing methane levels will have a significant effect on the GHG reduction targets set by governments. Livestock production is unique because it contributes to the problem and suffers from the consequences.

The steady increase in temperature is predicted to have a direct effect on water supply, the future distribution of livestock species and breeds and their adaptability to increased heat load, the incidence and type of livestock diseases, feed supplies and grazing potential. All of this, of course, is likely to affect food security. These factors are a result of temperature changes itself, including relative humidity, rainfall distribution, changes in ecosystem and biome composition, woody species encroachment, and alien plant invasion.

Adaptation
It is important to understand how livestock adapt to their production environments. However, the complex nature of this adaptation makes it difficult to measure. To ensure sustainable production in hotter climates, animals and genotypes that
are better adapted should be encouraged. It is the responsibility of farmers to limit the release of GHG (carbon footprint) and water usage (water footprint) to ensure future sustainability.

This can be done in several ways: improving production efficiency, breeding to reduce the carbon footprint of livestock, implementing new or adapted production systems, and promoting sustainable human diets with low environmental impacts. Using technology to limit GHG emissions, water use and waste, and to turn waste into assets are also options.
Widespread neglect of grazing land lead to poverty in many rural areas. The degradation of grasslands also results in environmental losses such as erosion, CO2 emissions, water loss and biodiversity loss.

The primary objective should be to restore both environmental and economic value to grasslands, while preserving its social and cultural functions. The approach should be broad enough to include an assessment of existing policy, legislation and programmes aimed at improving the grassland resources for sustainable, climate-smart animal agriculture.

If rangeland and grassland vegetation recovers, it will increase carbon sequestration in biomass, improve climate change resilience, and improve production efficiency. The needs of rural people should also be addressed, as many are still entirely dependent on grasslands and livestock. Risk identification and evaluation, as well as decision support systems, would greatly assist pastoralists in management and decision-making.

For these tools to be truly effective, however, they need to be founded on databases generated from sound research results. The aim would be to inform stock farmers about environmental risks, such as droughts or floods, and extreme events, such as high and low temperatures. This will help farmers to introduce strategies for minimising their effects.

Productivity
An effective way of reducing the carbon and water footprints is to reduce livestock numbers and increase production per animal. Greater productivity generates less GHG emission per unit of livestock. Production efficiency can be improved through breeding, feeding management and alternative production systems. There is sufficient genetic variation in South Africa’s livestock to allow for the breeding of animals that will result in improved production efficiency. The effective use of cross-breeding is one such strategy.

GHG emissions per animal can also be reduced substantially if the comparatively low fitness (reproductive rate and longevity) can be addressed. Alternative traits within breeds should also be investigated, such as days to calving, kilogram produced per large stock unit (LSU), residual feed intake, residual daily gain, or derivations thereof, combined in a multi-trait selection index.

Management strategies also require investigation, as does manipulation of nutrition, including breeding of new forage and pasture cultivars. Carbon credits can be generated through efficiency gains, but it is not yet clear how these can be measured and validated.

Climate change
Global warming is expected to have more extreme effects on Africa than on any other continent. The anticipated changes will alter southern hemisphere environments and vegetation, which are certain to have a negative effect on livestock production. This in turn will have political, economic and social consequences, many of which will also be negative. Global warming affects sustainable animal production in several ways. A higher ambient temperature leads to heat stress, nutritional stress, and lowered production and reproduction, while different rainfall patterns affect aspects such as rainfall and humidity.

These factors may lead to new animal and plant diseases being introduced or existing diseases becoming more of a threat. At the same time, the nutritional value of pastures are expected to change, and growth, yield and stocking rate altered. Ambient temperature has the biggest direct effect on livestock production, while nutritional stress has the largest indirect effect on grazing animals in the tropics and sub-tropics.

In sum, livestock in southern African countries will need to adapt to higher ambient temperatures, lower nutritional value in grass, and expansion of diseases, especially ticks and tick-borne diseases. To meet these challenges, it will be crucial to match genotypes with production environments. To assist with this, it is important to develop a livestock discomfort index.
It is equally necessary to address the disconnection between food and nutritional needs, which focus on nutrient-rich foods.

This will assist the development of strategies for environmentally-friendly production and processing, while supporting well-nourished populations. In addition to developing methodologies to calculate the carbon footprint of different human foods, it will be vital to measure the nutrient density of food. Choosing nutrient-rich foods over nutrient-poor, energy-dense foods is one way of reducing the amount of food required to meet nutritional needs.

Any reduction in consumption of meat and dairy products may compromise the dietary intakes of those nutrients that meat and dairy products supply in relatively large proportions. The risk is greatest where those nutrients are already in short supply. Particularly important are protein, vitamin A, vitamin C, thiamin, riboflavin, niacin, vitamin B6, folate, Vitamin B12, iron, zinc and calcium. It should also be remembered that plant-based sources of these nutrients are of lesser quality and have lower bio-availability.

The amount of food consumed has the strongest influence on the environmental impact of the food source. Eating more food than required and wasting it therefore poses obvious problems, and needs to be addressed when considering a sustainable diet.

GHG emissions
In general, estimates of emissions from livestock are not accurate. This is because generic co-efficients applicable to all animals are commonly used, and these do not take differences in production efficiency and production systems into account. Here in SA, the lack of detailed GHG emission and water usage data for the livestock industry should be addressed. Previous GHG inventories were mainly based on the Intergovernmental Panel on Climate Change (IPCC) methodologies, which are inadequate and inaccurate.

They did not include all livestock species, production systems and the energy costs of feed production, feed and livestock transportation, and livestock product processing. If viable, the official LSU system used in SA should be used in emission and water usage reporting; this will help information transfer and link the data to current livestock management practices.

It is important to calculate the carbon sequestration potential of the natural and cultivated grazing areas in livestock production systems, as well as the GHG emitted from grassland fires. Downstream aspects that also need attention include techniques to accurately measure GHG, carbon sequestration and water footprint, as well as databases of emission figures.

A particularly positive move would be to use these emissions and waste for the benefit of the environment. Downstream aspects that need attention are methane capturing and energy generating units/plants, treatment of manure and waste that limits CH4 release and water use, and management of agricultural wastes and effluents to limit water pollution. It is also crucial to learn how to apply techniques and methods to earn carbon credits from the livestock value chain.

Combine efforts
The livestock industries need to recognise the effect of livestock on climate change and actively support strategies to mitigate it. No single organisation in South Africa can do this on its own. Academics, researchers and industries should combine their efforts, and a centre of excellence should be established urgently to conduct research and build capacity.