The following notice appeared in an upmarket lonely-hearts website: “I am a beautiful 25-year-old girl looking to get married to a guy who makes a million a year. Where do you rich guys hang out? I’m available. Please call me.”

In due course, the following response appeared: “I’m an investment banker, and fit your bill. I make a million a year. What you are suggesting is a trade: your looks for my money, but here’s the problem. Your looks will fade, so in accounting terms you are a depreciating asset. In stock market terms, we would call you a trading position, not a buy and hold. It doesn’t make good business sense to buy you, which is what you are asking, so I’d rather lease, which means dating, not marriage. Are you interested?”

Of all the numerous accounting terms, ‘depreciation’ is perhaps the most misunderstood. And to increase the confusion, you’ll be told the figure needs to be added back to profit in order to calculate cash flow! Let’s see if we can clear it up once and for all.

The ravages of time
All assets deteriorate over time. They have a finite useful life, and eventually have to be replaced. A tractor, while working, uses fuel and oil, and needs servicing, spares and replacement tyres to keep it going.

All of these items come at a cost that eats into the cash resources of the business. But there’s another important invisible cost that is often forgotten: the cash you should be putting away to replace the tractor when it eventually reaches the stage where it can no longer do the job.

This is what accountants call ‘depreciation’. It’s not cash; it’s an estimate of the amount you should be saving to replace the asset.

Whether or not you actually put cash away to cover this expense is beside the point. You should be, and to get a clear picture of the farm’s ‘profit’, you need to proceed as if you were putting money away to pay for replacements when necessary.

As for the mystery of added-back depreciation, have a look at the table. 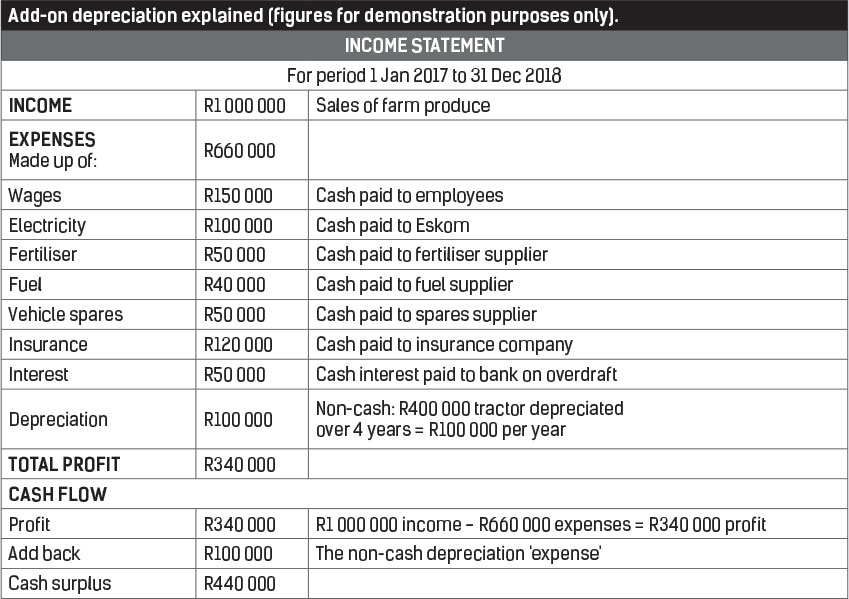 The figures, for demonstration purposes only, are the accounts of a hypothetical small farm generating an annual income of R1 million.

The operation has the normal run of expenses, including wages, electricity, fertiliser and so on. These are all paid for in cash at the end of each month.

The farm operates only one tractor, which was bought two years previously for R400 000.

Despite the fact that it is expected to give good service for at least 10 years, SARS tax tables permit tractors to be fully depreciated over four years.

This means that the accountant can deduct a full R100 000 as depreciation cost. This, of course, reduces the ‘profit’ substantially, and consequently also the tax payment due.

Once the four years is up, the R100 000 depreciation charge will no longer be permissible, and the ‘profit’ figure will shoot up, meaning that much more tax will now be due.

To determine the actual cash flow from the accounts, add the non-cash depreciation figure back to the profit. Voila! There you have the cash flow figure for the year.

The most destructive disease of potatoes