Johannes Tshoke has risen above stock theft, the problems of farming on communal land, a lack of money and other challenges to get his own farm. He is now set on becoming a commercial farmer in the hope of leaving a legacy for his children. Peter Mashala visited him. 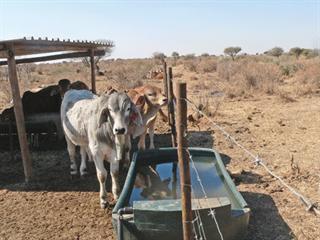 Johannes Tshoke (67) farms cattle, goats, sunflower and yellow maize on a 707ha farm near Dikebu, in the Moretele Local Municipality in North West. He’s faced – and still faces – many challenges, but believes he can turn his dream of becoming a commercial farmer into a reality, so that he can leave his farming enterprise to his six children.

He bought his first tractor in 1982, after some careful saving, as he was working for a bus company at the time, earning R134/month. Back then, he produced maize on communal land in Dikebu only to feed his family. In 1983, he bought his first cow. “That cow gave me half of the herd that I have today,” he says. He ran the cow with other cattle in the community. She calved every year. After 14 years, Johannes had a herd of about 40 cattle. Then, in 1996, nine of his cattle were stolen and slaughtered.

Stock theft
“It was like a very bad dream,” he says. “I only found chopped-off hooves and blood everywhere.” The cattle were killed in the most inhumane way possible. Johannes realised he needed to move away from communal land, as he could never build a sustainable enterprise under these conditions.

He started looking for a farm through the various land reform programmes. He wanted one where he could practice proper farm-management principles, such as controlling his breeding programme, for better results, he says. He submitted various applications to these programmes for land, but while waiting for a response, thieves struck again in 1997. Another nine of his cattle were stolen and killed in the same way. In 1998, more of his cattle were stolen. His original herd of 40 was reduced to 15.

Then in 1999, the thieves stole 11 of his goats. But Johannes refused to give up. Instead, he left his job to farm full-time to keep a closer watch on his livestock and to build his enterprise back up again.

His own farm
By 2003, his cattle herd had increased to 27. As he was no longer employed, he still had to support his family, and that number of cattle wasn’t enough. “I had to make a plan to increase the amount of cattle I had,” he says. Because he couldn’t qualify for a loan, Johannes asked his son, who was employed, to take out a loan on his behalf.

Johannes bought 13 heifers from a local commercial farmer with the money. A few weeks later, he selected some cattle from his old herd, and sold them to partly pay back the interest on the loan. Finally, in 2009, after 13 years of wrestling with the land affairs department, Johannes was granted a 707ha farm through the Proactive Land Acquisition Strategy programme (PLAS).

Aside from a borehole, there was no infrastructure on this farm, he says. But he moved onto it the same year, with a herd of about 100 mixed-breed cattle, 40 goats and three tractors.