Exhibitors’ fears about the demo cancellation and losing customer contact were laid to rest at this year’s Nampo show. In fact, more staff were available to deal with specific enquiries – with the range of hi-tech machines available, a one-on-one with an expert beats a glimpse of a machine as it heads up the field.

With implement prices soaring, however, it’s unlikely that anyone would make a purchase without a personal demonstration on their own land. Joe Spencer reports.

Colombo Trailed groundnut Harvester
This small Colombo-trailed, groundnut and bean harvester is imported from Brazil by Valtrac, Parys. It joins the very successful larger Colombo machines already on the South African market and presents the opportunity for smaller growers to mechanise their harvests.

Bell Equipment
TLB Bell Equipment now assembles this J-Series Tractor Loader Backhoe in its world-class facility at Richards Bay. Many of the major components are manufactured locally. Bell TLBs are both sold here and exported to world markets (including North America, where they are sold in John Deere livery). To celebrate this achievement Bell painted this unit in the colours of the South African flag, especially for Nampo. The model 315SJ is fitted with a John Deere 4045T, 4,5-litre engine rated at 69kW, and has a powershift transmission.

Uniekum potato lifter Uniekum Landbou Masjiene has an excellent reputation for quality and innovative design. The company specialises in equipment for potato growers and this tractor-drawn lifter is one of its latest products. The implement dispenses with the many V-belts or drive chains normally associated with this type of machine. It replaces them with hydraulic motors driven by a pump connected to the tractor’s PTO drive. Web speed can be controlled from the seat and the depth of the lifting share is adjusted with the tractor’s three-point linkage controls.

The Cheeta pelleting machine
Jan Haasbroek’s pelleting machine, manufactured by SJR Staalwerke, has some unique features, such as a cam arrangement to adjust the length of the pellets. It also has an electronic link that reads the power used by the pelleting dies. If the load goes over a preset level, it stops the intake feed mechanism temporarily. Jan claims that the exclusive design enables the Cheeta, driven by a 22kW motor, to have the same production capacity as competitive machines of 55kW.

Foton 1254 tractor
Top of the power tree, in the current influx of Chinese tractors, is the newly introduced Foton 1254. This is a six-cylinder model pushing out 92kW from its Perkins 1006-style engine. It has a 16-speed synchro gearbox and features such tried and tested components as a LuK clutch, Carrero front axle and Donaldson air filtration. Foton is showing its confidence by offering a two-year warranty on this machine.

Falcon Rotorspreader
The design of the Rotorspreader has remained virtually unchanged since its launch more than 40 years ago. Falcon Agricultural Equipment has been manufacturing its version for more than 20 years and it’s doubtful whether there’s a cheaper method of spreading farmyard manure — plus, this machine’s maintenance costs are minimal. Like all the machines at Falcon’s Nampo display, this latest model reflects a continuous improvement in quality.

Kongskilde Paragrubber
The Kongskilde Paragrubber with disc coulters is designed for maximum cultivation of the subsoil with minimum surface disturbance. As it’s a particularly rugged implement, it can cultivate to a depth of 500mm. This configuration is particularly effective in relieving compaction in pasture and removing a plough pan without bringing clods to the surface. The tine assemblies have a hydraulic automatic reset mechanism activated by a nitrogen-filled accumulator. 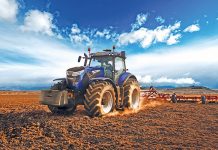