Marek’s disease in poultry can cause farmers huge economic losses. This is why Boehringer Ingelheim has invested in the development of a vaccine for Marek’s disease, which has proven effective against various strains of the pathogen.

The poultry industry can collectively breathe a sigh of relief thanks to a new development in Marek’s disease vaccination: PREVEXXION RN.

Globally, the deadly disease that paralyses and reduces the yield of young chickens is causing great financial losses within the industry and negatively affecting the egg production, life expectancy and bottom line of many poultry farmers all over the world.

This very real threat to poultry farmers is why Boehringer Ingelheim has been working on a long-term solution. The next generation Marek’s disease vaccine has been developed to tackle this deadly problem head on.

The disease and the solution

Marek’s disease virus (MDV) is a common immunosuppressive disease that affects chickens on a global scale. It occurs in both commercial and backyard environments and often has a devastating impact on the longevity and health of both young and fully grown poultry.

Young chickens are most at risk of catching and spreading the virus through their environment and the disease can persist throughout an infected individual’s lifespan, causing continuous environmental contamination and increased risk of infection.

Over the past 20 years, several studies have shown the emergence of increasingly virulent strains, which has increased the need for a new vaccine to preserve poultry stock and protect farmers’ livelihoods.

Boehringer Ingelheim’s solution to MDV comes in the form of PREVEXXION RN, a new vaccine that is safe and efficacious against very virulent MDVs. Clinical studies have concluded that chickens vaccinated with PREVEXXION RN show no mortality, no lesions, no clinical signs and no bodyweight differences compared to unvaccinated birds.

While classic vaccines are developed through passages in cell cultures, increasing the safety of the vaccine, this development method also has the potential to decrease the vaccine’s efficacy.

PREVEXXION RN was developed to provide the right balance between safety and efficacy. This new vaccine can be administered in ovo or by subcutaneous injection, provides an onset of immunity from just five days of age and grants vaccinated chickens long-lasting immunity.

MDV maintains constant pressure on poultry farmers, necessitating the need to keep this particular disease under control through vaccination. In an effort to combat this threat to the industry, Boehringer Ingelheim aims to lessen the likelihood of infection, transmission and death through the use of this new vaccine. 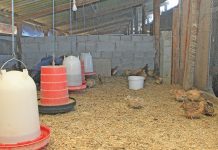