Uranium mining in the Karoo poses serious threats to the environment and farming community, according to Dr Stefan Cramer, advisor to the Southern African Faith Communities’ Environment Institute. Dangers include radioactive pollution and high water consumption, he told Annelie Coleman.

Please could you provide a background to the possible mining of uranium in the Karoo?

Uranium was first discovered in the 1960s during the Soekor (Southern Oil Exploration Company) drilling campaign in the Karoo.

While we were focused on the fracking issue, a smallish Australian mining company, Peninsula Energy, silently amassed some 750 000ha of Central Karoo farmlands for an extensive uranium prospecting campaign.

Few people noticed and even fewer participated in the legally prescribed public consultations. This all changed with the advent of the Southern African Faith Communities’ Environment Institute (SAFCEI) in the Karoo, which lifted the veil of secrecy over the potentially destructive and disruptive uranium mining.

What are the affected areas and the possible consequences for the ecology of the region?

Three Central Karoo municipalities – Beaufort West, Prince Albert and Laingsburg – were to host more than 570 000ha of uranium mining over the next 20 to 30 years.

More areas were earmarked in the Northern Cape and Eastern Cape. The uranium deposits even extend into the Free State.

The environmental damage from uranium mining is well documented in countries such as Germany, the US, Australia and Niger. The main problem would be radioactive dust blowing long distances across the Karoo and beyond.

In addition to the radioactive and chemically toxic impact of uranium, the potential long-term environmental damage caused by uranium’s daughter products, such as radium, radon and polonium, are of grave concern.

Uranium is unfortunately soluble in groundwater and easily dispersed through aquifers. The high-rise tailings dams planned for the open pits are likely sources of radioactive fall-out into the river systems of the Karoo, which eventually drain into the Indian Ocean.

What are the long-term effects of the proposed mining on agriculture?

The huge water consumption of uranium mining and processing would be detrimental to the Karoo farming economy. The central processing plant alone, just outside Beaufort West, has applied for a water abstraction licence of 1,4 billion litres annually.

This is equivalent to the total water consumption of the Central Karoo municipalities. But it is the grazing animals that would be the first to be affected by the loss of vegetation as well as the radioactive dust and water pollution from the mines.

Epidemiological research from South Africa and elsewhere shows that radioactive substances are enriched in the liver and kidneys of grazing animals, and also show up in great concentration in the fatty content of wool. Imagine radioactive mohair or contaminated Karoo lamb. This would spell the end of Karoo agriculture as we know it.

It has been said that these effects would be felt far beyond the Karoo. Please explain.

Dust travels far and carries radioactive particles. Scientists have just discovered uranium from Australian open-pit mines in ice cores in the Antarctic, some 6 000km away from the source.

They’ve also found radioactive particles that have travelled across the Irish Sea from Cumbria in the UK to the Irish beaches.

Scottish sheep farmers are still affected by the fallout from the Chernobyl disaster in the Ukraine in 1986, which travelled 2 500km across Europe 30 years ago.

What about the job opportunities that could be created by the proposed mining?

Peninsula Energy has announced it would create some 250 jobs in the mines, with a short-lived boom of up to 1 000 jobs during the construction phase.

It has been silent on the required qualifications and where they would be sourced from, as most of the work is outsourced to sub-contractors.

In contrast, the emerging farming sector, agritourism and, in particular, renewable energy, would create better paying and more sustainable jobs.

Worldwide, the nuclear sector has been shown to be extremely poor in job creation, whereas the renewable energy sector represents the fastest-growing labour market. The Karoo is a world-class site for such developments.

We need more and better jobs. Uranium is not the answer. In fact, it’s a stumbling block towards a sustainable future for the Karoo.

Tasman Pacific Minerals Limited and the South African-Lukisan JVCo have announced the withdrawal of their joint application for mining rights to 570 000ha of Central Karoo farmlands in the Western Cape. What does this mean?

In effect, this reduced the prospective footprint of the uranium mining industry to only 12% of what it originally intended. We believe the companies pre-empted an outright rejection of their application by the Department of Mineral Resources in the Western Cape due to strong resistance in other sections of that government.

These include Science and Technology (fearing for the SKA [radio telescope]), Water and Sanitation (water use not licensable) and Environment and Development Planning (application untenable and unacceptable). It’s indicative that the news of the withdrawal came from the premier’s office.

This would be the first time in South African mining history that a successful prospecting campaign would not be honoured by granting mining rights – a great victory for those opposing this application! But the companies have indicated their intention to re-apply for 72 000ha of mining rights in the Beaufort West Municipality between Rietbron and Aberdeen.

The entire Southern Block with mining concessions between Leeu-Gamka, Prince Albert and Laingsburg falls away and will no longer be pursued by these companies.

Other areas in Merweville and the Northern Cape revert back to prospect-only status. This speaks volumes of the poor quality of the application document, and explains the huge impact of the exposure of these flaws through the vigorous scientific and technical objections lodged by stakeholders across the Karoo with the Western Cape government.

But uranium mining from even 72 000ha would have serious environmental and social consequences for areas far away from the current application.

The same arguments lodged against the much larger footprint also apply to the reduced area, which still entails a continuous series of open pits stretching for 70km across the Karoo, upsetting the hydrology of a large area.

You act on behalf of the SAFCEI. Tell us more about this institute.

We believe in the universal task to protect God’s creation.

What are the worst-case and best-case scenarios pertaining to uranium mining in the Karoo?

The worst case would be the Department of Mineral Resources granting a 30-year licence to the Australian miner, based on deeply flawed science and faulty technical details.

It’s also possible that other applicants suddenly show up and start claiming prospecting and mining rights across the Karoo.

The best-case scenario would be a moratorium or an outright ban on uranium mining in this sensitive region. Leave it in the ground! Let’s develop the Karoo as a renewable energy location.

What do you think is the government’s responsibility as far as this issue is concerned?

A moratorium on uranium mining in the Karoo is urgently required due to the many unknowns of this mining. It would require a strategic environmental assessment similar to the process currently underway with shale gas development. 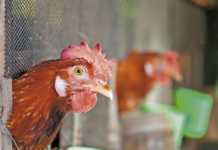 The cost of adhering to chicken welfare practices