The recent drought in the Swartland made Abri Richter realise that he had to adapt his farming techniques to ensure his operation’s long-term sustainability. He spoke to Glenneis Kriel about how he was improving his conservation farming techniques. 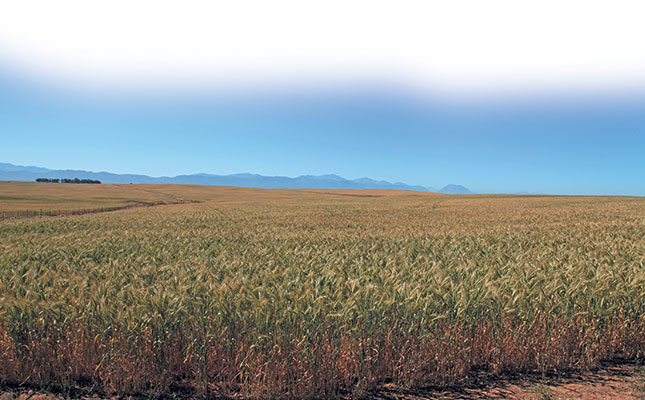 Many farmers in the Swartland suffered poor harvests this past season as a result of the drought. The region received less than half of its expected annual rainfall, and veld conditions were particularly poor in the region near Piketberg, where Abri Richter grows wheat on his farm, Panorama.

READ Bringing your veld back to life after drought

As a result of the drought however, Abri achieved a yield of only 1t/ha last season, which was 200kg/ha fewer than what he needed to produce to break even on the 1 300ha under production.

While he believes that minimum tillage partly shielded him from the drought, he realised some years ago that he needed to take his conservation farming methods one step further.

“I have to do this to remain sustainable in an environment where extreme weather is predicted to become the norm,” he says.

The first move towards attaining this goal has been to gradually eliminate the sheep component of his operation. Initially, this consisted of 500 ewes.

“An economist at Kaap Agri helped me do the sums. It turned out that I needed to produce only 90kg more wheat/ha than usual to make up for the impact that removing the sheep would have on my bottom line. I believed this would be easy to achieve through improved stubble management.”

He explains that keeping sheep inhibits one of the key principles of conservation farming, which requires that soil be covered with mulch.

“Just as you need a hat to protect yourself from the sun when you go to the beach, so the soil needs a mulch blanket to protect it from the elements and reduce evaporation.”

His wheat–medics programme is designed so that on 80% of the land under production, wheat and medics are alternated every year, while wheat is planted for a second consecutive year on the remaining 20%.

“So far, I haven’t experienced any yield or weed problems when planting wheat two years in a row. The lands in which I do this are rotated, however, so it is done on only 20% of the land in any one year to reduce the risk of herbicide-resistance,” he explains.

Planting medics is beneficial as it adds nitrogen to the soil. However, medics has a high protein content, so the stubble decomposes quickly after harvesting, resulting in little remaining plant material to cover the soil.

Moreover, the sheep graze the medics stubble after harvest, making it even more difficult to cover the soil adequately.

Abri also observed that on one land, sheep tended to graze on only one side because the dry climatic conditions had caused the medics on the other side of the land to lodge before it could be grazed.

The ungrazed land thus had a greater density of plant material, and produced a higher yield. This further convinced him that selling his sheep was the right decision.

No-till farming
Last season, Abri started using a small, no-till planter, which produced favourable results. Encouraged by this, he used no-till techniques on all his land for next season’s plantings.

“One should disturb the soil as little as possible to reap the full benefits of conservation farming,” he explains. “Disc seeding results in a higher sowing rate and consistent seed placement in marginal soil moisture under stubble. In drier seasons, this achieves yield advantages over tine systems.”

However, completely transitioning to no-till farming is a long process.

“You need to slowly incorporate crop rotation and stubble retention with minimum tillage into the production system, before you can switch. I don’t think the farm was ready for such a change up until now. Technology has also changed a lot since 2002, which eased the transition.”

Many SA farmers who use minimum tillage are hesitant to make a complete transition to no-till as they believe this may result in herbicide-resistant weeds.

Abri sees no-tillage as a tool for improving production, but adds that he might, in future, revert to minimum tillage or tillage if the weeds demonstrate herbicide-resistance, or he experiences compaction problems.

“I’d prefer to never till again, but you must make the system work for you,” he says.

For pre-emergent wheat management, he sprays a contact herbicide (Paraquat), along with a grass herbicide (Pyroxasulfone). A day before planting his wheat, he uses a sticker adjuvant, which helps increase the herbicides’ efficiency by retarding leaching and volatilisation.

He applies the herbicide Resolve for broadleaf management, and Tomahawk to manage more woody weeds when wheat is in the five- to six-leaf phase.

During medics rotation, Abri applies grass herbicides carefully selected according to their active ingredients to prevent the development of herbicide resistance. He no longer uses glyphosate (Roundup), as he is concerned that it could damage the wheat plants.

In an attempt to eliminate herbicide use, Abri experimented by refraining from spraying a small area of wheat on one of his lands. However, the untreated wheat resulted in complete crop failure.

Planting
Abri uses a locally manufactured Equaliser single- disc planter. This rugged machine is suitable for the stony conditions of some of his soils. Seeds are planted at an intra-row spacing of 25mm, and planting density is about 75kg of seed/ha.

“Wheat should be planted close enough together to overshadow and have a negative impact on weed germination, but not too close together to create negative competition between the plants,” he says.

Abri applies about 75kg/ha MAP (monoammoniun phosphate) to the seed at planting, and this past season also applied 75kg/ ha of Neutrog 8:8:1 to some of his land, with promising results. The coulter of his new planter allows him to plant in harder soils than would be possible
with a tine planter.

This means that he is now able to plant during the optimal planting time in May. In the past, he would have had to wait for the first rain in May (which often occured only in June) before planting.

Nitrogen
According to Abri, the use of minimum- or no-tillage and medics stubble retention has reduced the volume of nitrogen required for wheat production, from 70kg/ha to about 46kg/ha, depending on climatic conditions. He pays about R4,80/kg/ha for KAN, a nitrogen fertiliser.

“Over time, a farmer gets a good feel for the volume of nitrogen that should be applied by simply looking at the crop and climatic forecasts. It’s a good idea, nevertheless, to conduct annual soil samples to monitor this, and also to conduct leaf samples to ensure that the crop isn’t suffering from nitrogen or other nutritional shortages.”

The use of conservation farming methods has, over the years, helped improve the life, structure and organic content of his soil.

Abri is in the process of buying a neighbouring farm, which had been under monoculture production for 14 years.

Three years ago, he started renting the land, and switched to a medics rotation programme.

“This farm’s production level was about 1t/ha lower than Panorama’s when I started renting,” recalls Abri. “While the soils in this region aren’t great, farmers can, through conservation farming, improve their production efficiency and remain sustainable in the long term.”

Investing in lucerne pays off for western Free State farmer