One of the most difficult diseases to control in capsicums is powdery mildew. 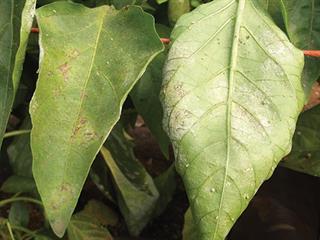 One of the most difficult diseases to control in capsicums is powdery mildew. With more than 1 000 host species, an outbreak is almost inevitable when conditions are favourable. The powdery mildew that attacks peppers – Leveillula taurica – is a relatively new disease that started to spread around the world in the latter part of the 20th century. It is different to other species of powdery mildew in that it develops inside the leaves and not on the surface. This makes control much more difficult.

Mildew normally occurs in wet conditions but powdery mildew is worse in dry conditions. That said, it is even worse
when the humidity is up, and worse still under cover where the leaves remain dry. The spores do not require free water to germinate on the leaves. L. taurica also attacks tomatoes, although there is another species of powdery mildew that specifically targets tomatoes as well.

Life cycle
After landing on a leaf, a spore of L. taurica germinates, enters a stoma (pore) and then grows within the leaf tissue. After two or three weeks, the fruiting bodies grow out of the stomata and release spores into the air, to be carried to other leaves. This mildew does not infect fruit or stems. The ideal temperature for infection is between 20°C and 25°C. At 30°C and above, growth stops.

I never have a problem with outdoor peppers, but those grown under plastic cover will be destroyed by powdery mildew if not sprayed. And even when I do spray, the powdery mildew causes damage. This is a common phenomenon in my experience.

Two of my clients grow crops under plastic cover and always struggle with this disease. Both had a problem with their dripper system and placed sprinklers in their tunnels as a temporary measure – to discover a massive reduction in mildew infestation.

I subsequently discovered the reason for this: the spores contain sufficient moisture to germinate under dry conditions, but burst in the presence of free water. There is still a great deal to learn about controlling this disease under protective cover.

Aim for prevention
Where most of us err with control is by tackling the problem too late. Prevention, as always, is better than cure. It takes about three weeks from infection to the appearance of symptoms. With experience, you will see the symptoms earlier, allowing you to start treatment as soon as possible to delay the presence of mildew more effectively.

Wettable sulphur, sodium bicarbonate and potassium bicarbonate are all used for early prevention. Sodium bicarbonate is used at 500g/100l water with a wetting agent. The leaves should be thoroughly drenched to the point where they become shiny. This can be done until the first symptoms appear, then you can go over to systemic fungicides.

Main symptoms
Symptoms manifest as light patches on top of the leaves and as fuzzy mildew under the leaves. You can detect the presence of the disease earlier by holding a leaf up to a light and looking for light patches.Infected leaves drastically reduce yield, and usually fall off. A 10% infection will result in 10% yield loss, and so on. Remember to alternate systemic products, as resistance builds up rapidly in this disease. For this reason, it is worth discussing products with a crop protection representative, as some systemics may have already lost their effectiveness in your area.

Don’t be beaten by bollworm 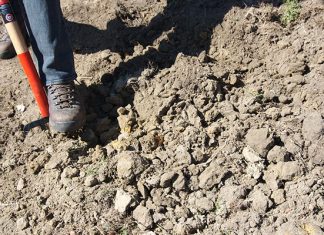 September 19, 2020
As much as 30% of South Africa’s agricultural soil resource is deemed to be acidifying, mostly due to inefficient or incorrect liming practices. This is according to a recent presentation...