Combining quantity surveying and farming is highly unusual. But for Joachim Prinsloo, Agri Mpumalanga’s Young Farmer of the Year 2013, it has made all the difference. Lindi van Rooyen visited his farm in Kiepersol. 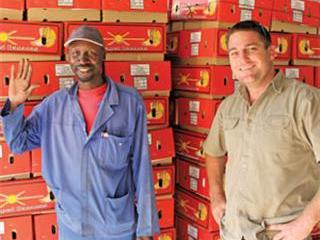 Joachim Prinsloo practises precision farming of a different kind. Having a degree in quantity surveying, he is naturally inclined to measure, monitor and recheck – and he does so as a matter of course on his farm. Every activity is measured
accurately to determine its profitability and performance, thereby determining his next move.

The system has worked well for Joachim, who farms in partnership with his family across three farms in South Africa and one in Mozambique. The business, called Sunreaped, derives 30% of its income from macadamia nuts, 20% from Hass avocados, 45% from bananas and 5% from ginger. Precision management has helped him to manage this diverse
group of crops well – resulting in the success he has achieved.

But Joachim insists that his approach to farming is not unique. “At the end of the day you produce something for as little
as possible and sell it for as much as possible. But it does help that I have a good feeling for what will work on the farm and what won’t. I also have a pretty good knowledge of mechanics and economics, and this helps me to understand
the factors behind producing a good, profitable crop.”

Tight margins
Joachim’s experience in quantity surveying has certainly come in handy in maintaining the farm’s profitability. “I know it costs me exactly R42 to produce an 18kg box of bananas, so I know I can’t accept anything less than that on the
market,” he says. “Each activity on the farm has a margin within which it’s profitable. Beyond that, it’s not worth
pursuing.”

He works out a budget for his machinery to ensure that the bill for his fleet does not overtake his income. “I know a tractor
has a lifespan of 10 000 hours, so I work out what each activity such as crop spraying and spreading mulch between trees costs me. Each year I decide how many of those tractor hours I’m going to spend on an activity on the farm and how much it’s going to cost me.”

But he concedes that there are no short cuts and certain steps cannot be removed. “I just need to know where the lines are between making a profit and making a loss,” he says. “If the price of a crop drops below a certain level, I have to stop producing it.’ Joachim explains that his banana crop, for example, is getting very close to becoming unprofitable. “Production costs have increased drastically, as have wages and electricity. I predict there won’t be a banana orchard left in South Africa ten years from now, unless the consumer is willing to pay a lot more for the fruit.”

Cutting transport costs
Sunreaped’s fleet of three trucks is managed to maximise efficiency. “The trucks leave with fresh produce and come back fully loaded with fertiliser or packaging,” explains Joachim. The farm’s produce is sent to markets in Johannesburg, Pretoria, Cape Town and Durban. A portion of the bananas are sold to Freshmark. Joachim has a dedicated staff member that takes care of all the vehicles on the farm. “They’re in good hands,” he says.

Various crops to counter risks
The contours on Joachim’s Mount Grace farm allow for multiple orchards, which helps to spread risk. “Last year, for example, ginger from China was dumped on the local market, so the price fell drastically,” explains Joachim. “But the farm could keep going because there’s more than one crop. This is especially important with ginger, because the price is so volatile.”

Joachim employs 115 permanent workers. In summer, most of the labour is used for banana production.“From October to February, the bananas require a lot of labour to spray, harvest and pack,” he explains. “Ginger is harvested between February and October, as it’s needed, because the crop can stay in the soil for an extended period without spoiling.” In April, the labour is switched to the avocado and macadamia crop. During this time most banana farmers cut back on their labour, but because of the diversity of his crops he can continue to utilise all his workers.

Employees
About 60% of the workers live on the farm while 40% travel to work from nearby towns. Workers living on the farm pay 10% of their salaries towards housing, which includes water and electricity. Joachim manages this large workforce strictly according to a set list of procedures that must be followed for each activity of the farm. “All productivity on the farm is precisely measured,” he explains. “They have to pick a certain number of nuts per day, for example, or fertilise a certain number of hectares.”

The business has five farm managers, all of whom have driver’s licences. “They are my eyes and ears on the ground and ensure that all the procedures are enforced,” says Joachim. His good relationship with his workers has ensured that there are very few misunderstandings. “I grew up with most of the workers, so I know them. There’s one group that has been on the farm for 24 years,” he says.

Joachim provides free antiretrovirals to HIV-positive workers. Most of the medication is bought from a pharmacy, because many of the workers fail to qualify for free government medication as their HIV is not at an advanced stage.
“This creates a better relationship with my staff,” he explains. “I rely on a relationship of trust with my workers, so things like this are important.”

Turning to wages, Joachim admits that the new minimum wage has taken a “massive bite” out of his bottom line because of the number of labourers he employs. “The legislation increased my wage bill by 50%,” he says. Commenting on his winning the Agri SA Mpumalanga Young Farmer of the Year award, Joachim does not accept that there is a big secret to achieving success.“You have to work harder, smarter and then work even harder. That’s all there is to it,” he says.