Many vegetable crops are susceptible to root knot eelworm (Meloidogyne spp, also known as nematodes or roundworm), and beans are no exception. 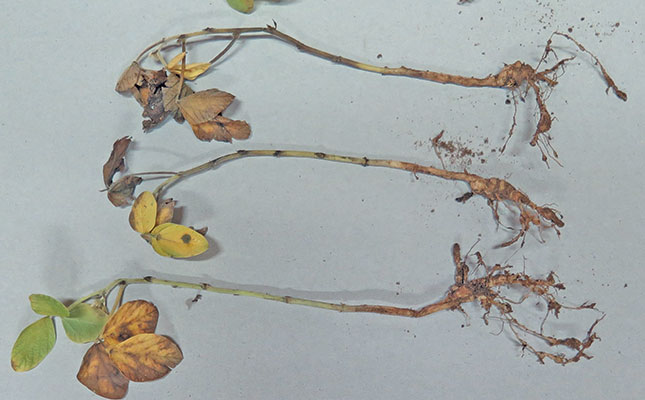 Often, a crop has a mild infestation of eelworm that does not cause significant damage.

However, the pest then gains an early foothold on the following crop.

I was once caught out after growing beans on a land previously planted to Swiss chard that had been mildly infested with eelworm. The bean rows were at a slightly different angle to the position of the old chard rows. The infected bean plants showed up in the exact places where the eelworm concentration had been at its highest in the chard rows!

I learnt from my error; from then on, I always examined plant roots for eelworm infestation after a crop was finished.

To check the status of eelworm in a land, take a soil sample and send it away for analysis. (Eelworm is far more active and mobile in sandy soil, and conversely is seldom a problem in clay soil.)

The cost of a soil analysis is certainly justified, given the price of irrigation, fertiliser, seed and land preparation. It’s simply not worth taking a chance on planting without knowing the eelworm status of the soil.

Get rid of clods first
If the eelworm level is high enough to justify control, the soil should be fumigated, as this is the most effective method. A rig to carry out this operation comprises a drum of fumigant and an apparatus that distributes the product evenly through pipes attached to tines.

It is important to break down clods beforehand. A fumigant travels through the air spaces between soil particles, but it cannot penetrate the compacted soil of a clod sufficiently to kill any eelworm present.

Read the instructions on the product carefully for information on temperature, moisture content, dosage rate and so forth.

Fumigation is expensive, but can be highly effective if carried out correctly. On the other hand, if you don’t adhere to all of the requirements, you will simply be wasting your money.

After fumigation, seal the soil surface with a light irrigation or a roller.

Biological control
Eelworm have many natural enemies, which include species of beneficial nematodes. Fungi and bacteria also play a role in control.

As soil health improves with a greater organic content, so the eelworm hazard is reduced.

A final point: it’s important to distinguish between rhizobia nodules and eelworm nodules.

Both occur on the roots of legumes such as beans, but they are different in appearance. Rhizobia nodules, which extract nitrogen from the air to share with the plant, grow from the side of the roots and have an irregular shape.

Eelworm nodules are symmetrical swellings in the roots.

Bill Kerr is a vegetable specialist and breeder.