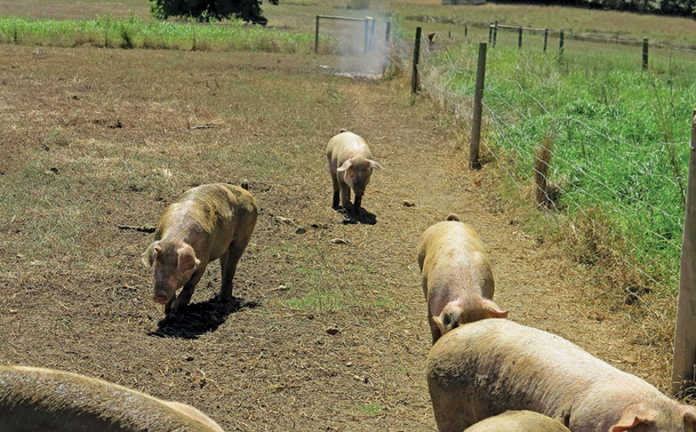 The following are diseases which often affect piglets:

Eperythrozoonosis is caused by Mycoplasma haemosuis, which breaks down red blood cells. It’s mainly found in countries where porcine reproductive and respiratory syndrome (PRRS) is present, and so is fairly uncommon in South Africa.

Piglets can be infected while in utero, and are thus born with the disease. The most noticeable sign in newborn piglets, up to the age of five days, is a pale white or yellow-coloured appearance due to jaundice.

The disease does not only affect piglets, and can also be present in growing swine. Infected sows develop anaemia, as well as fever, which can result in abortions and stillbirths.

The disease can be spread by lice, infected needles or the ingestion of the secretions, such as blood and urine, of affected animals. The disease is diagnosed through a blood smear.

The bacteria colonise the large intestine of newborn piglets within 12 to 24 hours after birth. It damages the cells lining the intestinal wall, and releases toxins that are then absorbed into the rest of the piglet’s body.

Affected piglets are healthy at birth, but die within 12 to 24 hours after the onset of clinical signs. Severe bloody diarrhoea is the most obvious sign. Piglets may become thin and pale before death.

Treatment: As treatment is not very successful, focus on prevention. Prophylactic use of antibiotics, as well as improved hygiene, can reduce the number of cases, but more permanent control is achieved by means of vaccination. Vaccinated sows offer protection to their piglets through colostrum.

This is caused by the roundworm, Ascaris suum. Six hours after ingestion, the larvae migrate to the pig’s liver where they moult and move on to the lungs. Here they moult again and are coughed up and swallowed by the pig.

READ Vaccinate your animals: it’ll pay you in the long run

From here they move down to the small intestine where they mature and start to lay eggs, which restarts the life cycle.

Even in heavy infestations, clinical signs are unlikely to be observed. A growth rate of up to 10% lower than average, as well as a higher feed conversation rate, are likely, depending on the level of infestation.

Pigs may cough during the migration stage of the worm. Ascariosis is usually diagnosed post-mortem; the larvae’s migration through the liver results in a characteristic lesion known as a milk spot. Lung lesions may also occur.

Diagnosis in live animals is usually confirmed through a stool sample in which the worm eggs can be seen.

Treatment: Treatments via injection or in feed are effective. The proper washing of buildings is essential if the parasite has been found on-farm. However, control is made difficult by the hardiness of the Acaris egg, which can survive in the soil for up to five years. Eradication is possible through administering medication to the entire drove, as well as through the repopulation of the drove.

Glasser’s disease is caused by the bacteria Haemophilus parasuis, and has an incubation period of as short as 12 hours.

The bacteria are spread primarily through direct contact. Outbreaks usually occur in piglets three to six weeks of age, but pigs of any age can be affected.

The bacteria cause pneumonia

First signs of the disease is a sudden onset of fever and anorexia. A nasal discharge, difficult breathing and coughing are also symptoms. Lameness usually follows as joints become swollen and painful, and pigs may die two to five days after infection.

Clinical signs may be overlooked until the signs of chronic disease appear, which include symptoms of meningitis.

Treatment: All-in all-out practices, as well as thorough washing and drying of buildings can help reduce the risk of infection on-farm. Antibiotic treatment is effective as long as it is treated in the early phase.

Once in the chronic phase, the response to treatment takes much longer. Vaccines are available in cases where farmers have persistent problems. Eradication has not yet been reported.

August 6, 2020
Pineapple producers in the northern KwaZulu-Natal region have expressed the hope that as the economies in overseas countries start to “open up” after the COVID-19 pandemic, exports will re-commence and...