It was a Thursday, and this means spaghetti bolognaise in my house. So you can imagine the shock when my schoolteacher daughter visited and cooked a dinner that shattered the inflexible routine of her parents. What we got was rigatoni with beef sauce, and this is how you make it.

To make rigatoni with beef sauce for four inflexible and puzzled diners, you will need:

We start with the pasta. Rigatoni is not spaghetti – you can quote me on this. Instead of narrow sticks, rigatoni are grooved, large-bore tubes each roughly 40mm in length with an internal diameter of 10mm. This offers two benefits: the outer grooves and the wide bore hold a lot of meat sauce, and the shape of the pasta makes it more refined to eat, especially for those of us with beards.

To cook, boil it in lightly salted water for 12 minutes or so until al dente (firm to the bite). But do this at the end, as the sauce cooks slowly.

Place the minced topside in a mixing bowl, add a little salt (the diners can add more later if desired), half a teaspoon of coarsely ground black pepper, and the pinch of cayenne pepper.

Do this in full consciousness: a pinch means just a pinch. Finely chop the origanum and thyme (about half a teaspoon of each) and add this to the meat. Mix the herbs and spices with the mincemeat and let the mixture stand under cover for 15 minutes or so.

Heat the olive oil in a large, heavy-based saucepan. Peel and thinly slice the onion, and sweat it in the oil until soft and translucent. Add the seasoned mincemeat and stir vigorously for all-over browning.

Stir this well to evenly distribute the ingredients, breaking up the tomatoes with a fork while doing so. Pour in the beef stock (use cubes, save time) and stir.

Bring this to a bubbling mass, then immediately cut the heat to a slow simmer, with the lid off, for about 90 minutes. Check several times to avoid adhesions. When nearly done, cook the pasta.

Drain the pasta and serve it on warmed plates. Pour over the meat sauce and finish off with a tablespoon of cream drizzled over the top. Serve this with a superior red wine, such as a Shiraz.

A festive feast for a jolly season 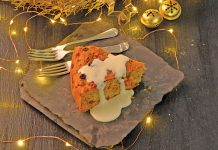