The combine harvester is a very old invention, first appearing over 180 years ago. Yet more than a century passed before the unwieldy early machines gave way to the self-propelled combines we know today. In this article, we explore the history of one of farming’s greatest labour savers.

Scotland lays claim to the invention of the combine harvester. It was here, in 1826, that the Rev. Patrick Bell designed a reaper machine.

His invention was large, pushed by horses and used scissor-type blades to cut the crop. Bell never patented it, however.

In 1834, US inventor Hiram Moore built and patented the first combine harvester. In the same year, another American, Cyrus McCormick, was granted a patent for his mechanical reaper or sickle bar mower.

Moore’s machine, which was drawn by mules or horses, could reap, thresh and winnow grains. In 1839, a harvester pulled by 20 horses harvested more than 20ha in a single day.

By 1860, harvesters with cutter bars several metres wide were being used on many US farms.

In the 20th century, a shortage of labour and the convenience and controllability of combine-harvesting prompted the move to mechanisation. Economies of scale generated by the increasing size of farms also played a role, as did the distinct cost advantage of mechanical harvesting over hand-harvesting.

This was as true in South Africa as elsewhere. Data collected for the period 1968 to 1981 shows that, in what was then the Western Transvaal, mechanical harvesting of grain increased from only about 30% of the crop to almost 95%.

My personal experience with combine harvesters dates back to 1960, when I sold my first machine. This was the Ransomes 902, which had been launched at the 1957 Smithfield Show.

In their day, Ransomes combines were considered state of the art, with an output of up to 6t/h, almost twice that of other models then on the market.

Ransomes manufactured its combine under licence from the original designer, Sweden’s Bolinder-Munktell. The company also built a trailed combine, the MST56. 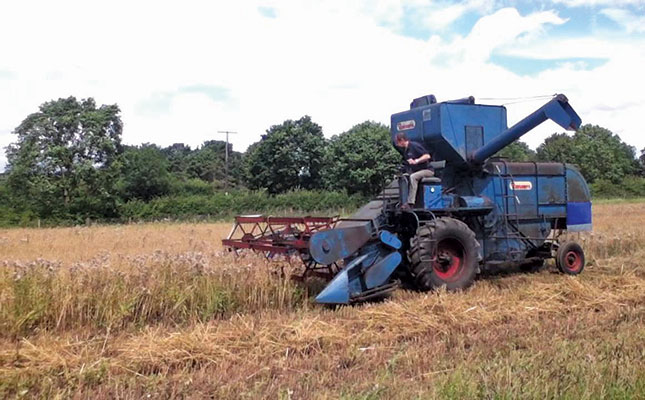 In 1843, Australian farmer JW Bull invented the grain stripper. Then, in 1882, a real breakthrough was made when another Australian, 17-year-old Hugh McKay, conceived the idea of the stripper harvester.

The prototype of this revolutionary concept, which could strip, thresh, winnow and bag the grain, was operated successfully on the family farm in Drummartin, Victoria.

The Sunshine harvester was the principal method of harvesting in Australia until 1913, when Headlie Taylor devised an improved version. McKay was so impressed by Taylor’s machine that he bought the rights to the new design.

By 1916, manufacture of the Sunshine Header Harvester was in full swing. Taylor also devised the first motorised harvester in 1924, and by 1927 the Sunshine Autoheader had become the first self-propelled machine to be sold in large numbers.

It is likely that the Sunshine was the first combine harvester to be used in South Africa.

A Sunshine Header can be seen in the museum hall at Nampo, and there is another at the Vintage Club at Baynesfield in KwaZulu-Natal. 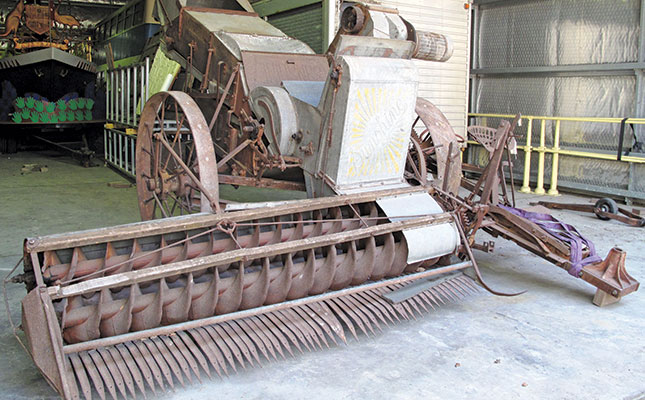 In the early 1930s, German agricultural machinery manufacturer August Claas, together with Walter Brenner of the University of Bonn, developed a prototype combine better suited than the US machines to harvesting the heavy, often damp, European crops.

Under reasonable conditions it could harvest 30t of wheat a day.

Some 1 450 Claas MDBs were in use in various parts of the world before the model was replaced in 1946 by the Super, which was sold around the world, including in South Africa.

Production continued until 1972, with total sales of over 65 000 units, including the smaller Super Junior machines for small-scale farmers launched in 1953. 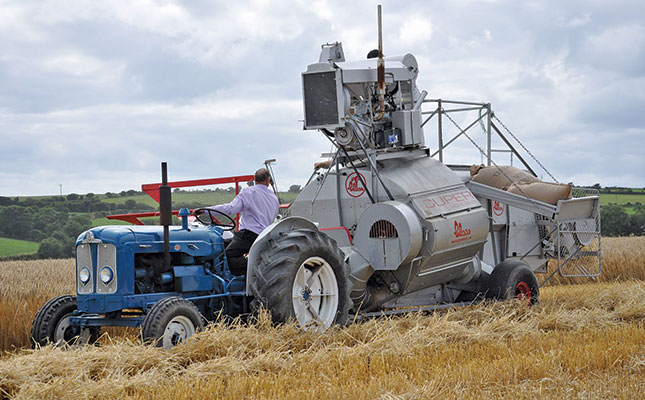 In the same year, after strenuous testing, Claas launched its first self-propelled combine, the Hercules, which proved a resounding success.

4 Top of the line

Claas claims that its recently launched Lexion 780 sets new standards in the history of combines, thanks to its integrated CEMOS Automatic, a driver assistance system.

The software controls specific default values set by the farmer, and after a short period establishes the ideal settings for the threshing conditions.

Sensors then monitor changing conditions throughout the course of the day, and the system optimises the settings accordingly second by second. 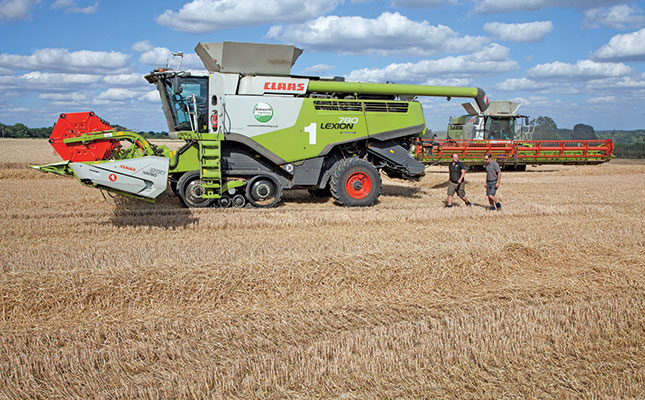 In 1936, Tom Carroll and a team of researchers at Massey-Harris (now Massey Ferguson) in Ontario, Canada, began work on the first commercially viable self-propelled combine.

This eventually evolved into the highly successful Model M-H 21, which went on sale in 1941.

It was relatively light and cheap and could be loaded onto a truck, making it suitable for contractors. 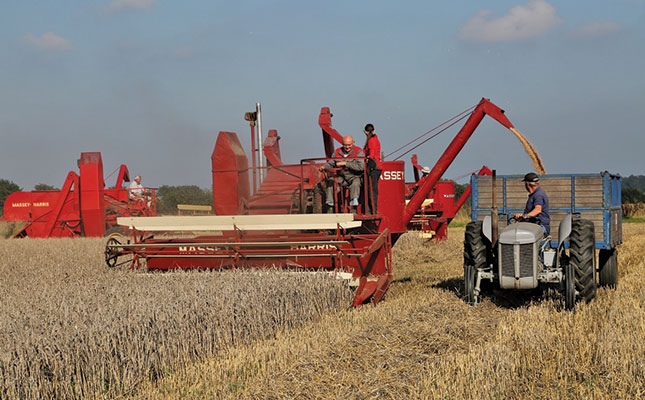 For many years, Massey-Harris, and subsequently Massey Ferguson, were world leaders in the combine market. Now Agco, the owners of Massey Ferguson, are aiming to compete again for this title with the launch of the IDEAL combine (seen here). 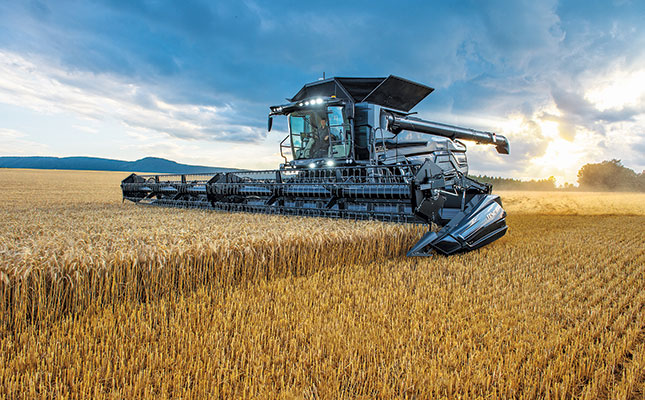 The company developed the machine based on critical factors such as reliability, ease of repair, parts availability, convenient and intuitive controls, and operating efficiency.

The MF IDEAL, also badged as ‘Fendt’, has a single rotor and a 12 500ℓ grain tank, and is powered by a 338kW AGCO Power 9,8-litre engine. It remains to be seen if it will make its way to South Africa.

In 1977 International Harvester (now Case IH) introduced the Axial Flow harvester, marking a departure from traditional combine harvester design. The threshing and separation are performed mainly by a rotor, as opposed to the drum and straw walkers used previously.

The processing area is a cylinder that spins and threshes the grain, allowing for a significant improvement in productivity. The rotary design by International Harvester was the first of its kind to be mass-produced and the patent gave IH a competitive edge over its rivals. 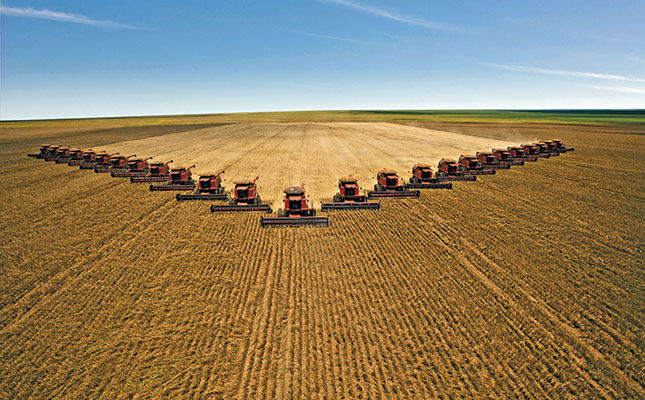 This impressive publicity photograph shows the combines at work in Brazil. South America currently has what is probably the third-largest share of the world’s self-propelled combine market after North America and Europe.

This small combine was available in South Africa in the 1970s. Suitable for owner-farmer operations, it may make a comeback now that Japan’s Kubota Group is the major shareholder in Sampo Rosenlew, based in Pori, Finland. 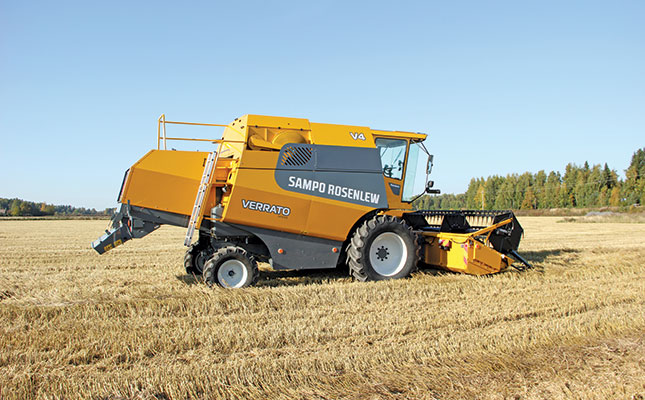 Sampo Rosenlew has produced more than 50 000 combines since production began in 1957, with more than 90% of its machines being exported to about 50 countries.

Claeys was founded in 1906 by Leon Claeys, a Belgian mechanic, and initially manufactured threshing machines. By the 1960s, it was one of the leading combine manufacturers in Europe.

In 1975, Sperry New Holland, which had acquired Claeys, introduced the world’s first twin-rotor combine, a technology still in use today. This photograph shows the new CR10.90 model. 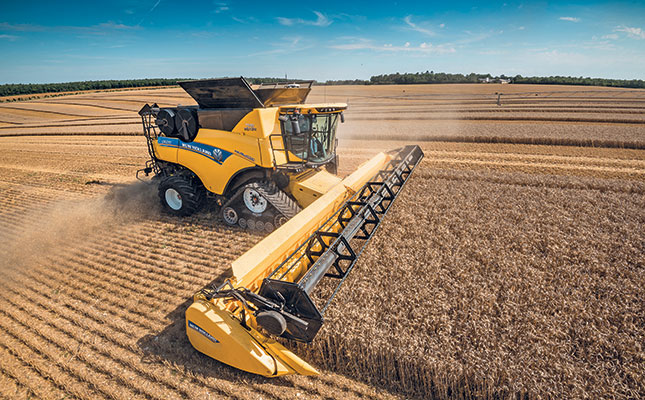 The New Holland IntelliSense system takes combine automation to new heights, introducing a number of improvements that consolidate the supremacy of what is claimed to be the world’s highest-capacity combine harvester. 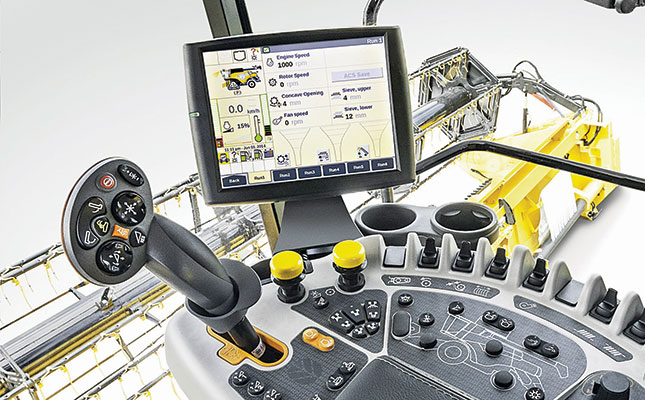 Moreover, the operator has to make fewer decisions.