An Agricultural Research Council study of the performance of Brahman bulls in feedlots across South Africa has highlighted the non-genetic traits, such as environment and herd of origin, that affect the average daily gain and feed conversion ratios of the animals. Researchers Melville Ferreira, Alfredo Lepori and Frans Jordaan explore the importance of the results, emphasising that maximum feed efficiency is essential for the long-term sustainability and profitability of the beef industry.

The world’s growing human population has resulted in an increased demand for protein, and sustainable beef production is key to meeting this demand in the long term.

But with natural resources under pressure, beef producers are being compelled to produce more from less. The combination of decreasing hectares available for crop production, increased utilisation of grain for fuel, and an increase in input and feed costs are some of the key factors that highlight the changing dynamics of agriculture.

Feed amounts to between 55% and 70% of a livestock concern’s total production cost, so a 10% improvement in animals’ feed efficiency can result in a saving of several hundred million rand per annum for the industry as a whole.

Moreover, measuring efficiency may result in decisions that increase productivity without increasing the cost of production, resulting in greater profit margins.
the importance of feed efficiency

The feed conversion ratio (FCR) is one of the traits calculated at the end of Phase C tests done by the Agricultural Research Council (ARC).

FCR measures the feed consumed to gain 1kg of live weight; the less feed consumed by the animal to gain weight, the more efficient it is. Tests show that bulls consume, on average, 3% of their body weight in feed per day.

When selecting for low FCR and high ADG, animals will become larger over time,
thus requiring more feed to gain weight and grow and maintain current condition. As growth is of economic importance (weaning weight, for example, has a direct monetary value), farmers select this trait to improve profitability.

However, care should be taken when selecting for higher weaning weights, as growth traits are highly correlated. Care should also be taken to avoid bigger calves at birth, as this may result in calving difficulties. In addition, heavier mature weights require an increase in maintenance requirements.

The study
The purpose of the recent ARC study was to determine the non-genetic factors that have an effect on the feedlot performance of South African Brahman bulls.

Most of the meat purchased on formal markets in South Africa is produced from cattle in a feedlot system. It has been found that a 1% improvement in feed efficiency has the same impact as a 3% increase in the rate of weight gain. Improvements in efficiency of beef production are vital for the long- term sustainability of the industry.

The study analysed performance data from four centralised ARC testing stations, focusing on the results of Brahman bulls tested between 1982 and 2017.

The bulls were grouped according to the month in which their 28-day adaptation period started. The reason for this is that they were moved from the farm to a new environment at the start of adaptation.

Thus, when the test began, they should have already adapted to the new environment. These months were grouped according to season.

The majority of the animals (544) started the adaptation period from May to June, with far fewer (78) starting between September and October. The tested bulls, originating from 81 herds, were distributed all over South Africa. The data of 1 449 Brahman bulls obtained from the national Integrated Registration and Genetic Information System (INTERGIS) database were analysed.

After the adaptation period, the bulls entered the intensive growth test stage for an 84-day period. By completion of the test, the results were compared with the 10-year rolling average for ADG and FCR per station.

This is the average performance of the bulls tested over the previous 10-year period, and compensates for the environmental effect on performance. Moreover, management and feed rations are standardised at ARC testing centres.

The results
The results showed that environmental factors had an effect on feedlot performance.

Table 1 lists these. Traits marked * had a significant effect on performance, whereas traits marked ‘NS’ did not. 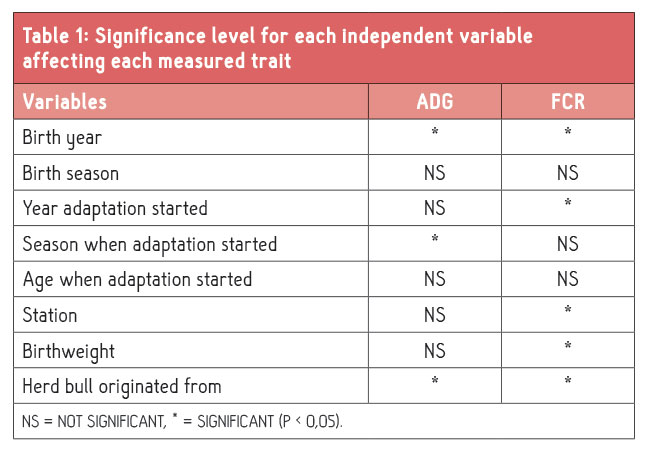 Table 2 shows the number of animal records and the averages. The average FCR in South Africa is between 4,5kg and 7,5kg. The averages in Table 2 for FCR are within this range.

Birth year
This might have had a significant effect on feedlot performance due to lower rainfall in some years and the differences in ambient temperature, which might have negatively affected milk production, resulting in lighter weaners. During seasons with low rainfall, less feed is available for the cow, negatively affecting her milk production and hampering the growth of her calf.

Herd of origin
The herd in which the bull is born had a significant effect on feedlot performance. This could be because some breeders selected more intensively for growth and feed efficiency.

Weight at start of test
This had a significant effect on FCR. Lighter bulls grew better than heavier ones at the start of the test. Compensatory growth was, however, experienced when bulls arriving for testing were below the required body weight. This was in contrast with bulls arriving heavier at the start of the test. To address this challenge, minimum and maximum weights on arrival date were prescribed.

The more tests that are done, the more accurate these values will become. This breeding value will become an important selection tool, and by using it as a benchmark, breeders can select for animals that produce more beef from fewer inputs.

More efficient animals will also lead to a reduction in greenhouse gases, central to assisting in the mitigation of global warming.

The global trend is to focus increasingly on residual feed intake, as it is phenotypically independent of growth and body weight. The trait is also moderately heritable (18% to 49%), which enables farmers to improve feed efficiency by selecting for efficient animals.