Although honeybush has long been used in parts of South Africa to brew a caffeine-free tea, it has remained a small-scale activity. However, the industry has potential to grow and thus create jobs for poor communities in the Western and Eastern Cape. Annabel Horn and Albert Ackhurst of the Western Cape’s Department of Environmental Affairs and Development Planning explain.

The Afrikaans word ‘fynbos’ can be translated as ‘fine-leafed plants’, an apt description of the honeybush plant. Honeybush, a typical fynbos shrub, occurs naturally in the Overberg region in the Western Cape and further up the coast towards Port Elizabeth.

There are several species of honeybush, including Cyclopia genistoides, commonly known as kustee, or coastal tea, C. intermedia (bergtee, or mountain tea), and C. subternata (vleitee, or marsh tea).

Recent years have seen successful efforts by researchers and farmers to cultivate the plant commercially.

Because honeybush can be grown on marginal agricultural land and does not have to be a monoculture, it holds much development potential for the regions where it can be cultivated.

Moreover, as honeybush is a pioneer species after fire or land disturbance, it enhances the establishment of the fynbos community in degraded land. Honeybush regenerates within three years after a fire or being harvested.

Fynbos is a species-rich vegetation type, growing on low nutrient soils, of which much of the possible medical and herbal use, while already valued, is still unknown. The likelihood is that as demand-driven supply for honeybush grows, so cultivation will grow, with greater accessibility and economic efficiency.

Green tea is much sought-after as it has a higher level of antioxidants. (Antioxidants are substances that neutralise free radicals. Free radicals, by-products of oxygen metabolism, are chemically reactive and can damage cells and tissues.)

Honeybush has potential on the global market, where the preference for this healthy herbal tea has already been established.

As diabetes linked to sugar intake is a concern, honeybush beverages provide opportunities to promote this fynbos plant to the marketplace as a low-sugar, naturally caffeine-free health drink. Honeybush also contains polyphenols, which are claimed to boost the immune system.

Marketing
The price of honeybush tea can be kept at an affordable level, given exchange rate benefits for exports from South Africa, and with the current trade linked to demand in the US and Europe. It can also meet local demand.

Certain honeybush blends have a retail value on the international market up to 10 times higher than on the local market (see table below). 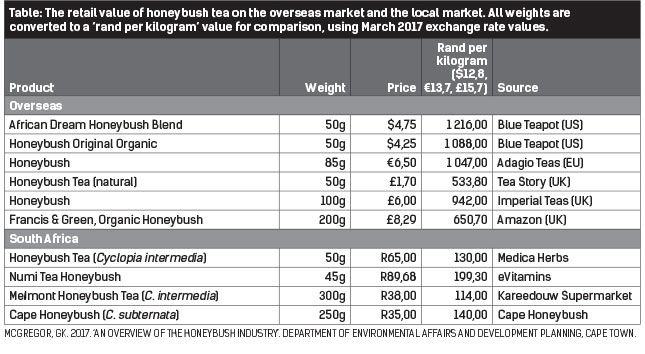 Clearly, producers would benefit greatly by selling at least part of their produce on the international market.

To maintain fair pricing, honeybush growers need to promote themselves as socio-economically ethical, and there may be an opportunity in the industry for endorsing projects where poorer communities provide for themselves through either agricultural land or picking indigenous fynbos.

There may even be opportunities for ecotourism where working fynbos farms can be visited, thereby promoting the already well-supported hospitality sector in the Southern Cape region.

Research by the Department of Environmental Affairs and Development Planning (DEA&DP) shows that South Africa accounts for 10% of the demand for honeybush tea and that the international demand far exceeds supply, indicating there is scope for significant growth in the industry.

There is also the possibility of secondary products, such as incorporation into cosmetic products; these, in fact, could have greater economic value than the primary product.

Sustainability
There has been concern from government protection agencies that honeybush plants occurring naturally in the wild might be harvested without sufficient care or consideration of sustainability of stocks, so this aspect requires monitoring.

Training programmes need to be well attended and access control permits given to marginalised communities, with support provided for their marketing and financial strategies and processes.

By integrating the environmental need to preserve an important species and the associated fynbos, and the imperative of economic development and upliftment of people living in poverty, it is possible to expand honeybush production as a sustainable industry.

Research conducted by the DEA&DP indicates that more than 80% of the honeybush product is still collected from the wild.

It is acknowledged that honeybush production would be difficult to police, particularly as much of it occurs in mountainous areas.

Therefore the training of pickers would need to emphasise sustainability: people have to understand that without healthy populations of the plant, they cannot make a living from it.

Unique selling point
Honeybush, whether in the form of green or black tea, is valued as a herbal and health tea, while the price is favourable for producers due to current exchange rates, and the product is gaining popularity locally too.

The promotion of honeybush tea needs to be well supported and appropriately advertised; obtaining organic certification, as well as diversifying the product, will grow the market and increase jobs in the industry.

The DEA&DP, through its biodiversity component, co-chairs the Honeybush Community of Practice with its Eastern Cape counterpart, which promotes the sustainable production of honeybush and its conservation, while also steering research needs and promoting transformation of the industry to include previously disadvantaged people.

The department developed guidelines for the sustainable harvesting of honeybush. From this flowed the wild honeybush harvesting field guide, which was translated from English into Afrikaans, the language of the local communities.

More than 100 honeybush pickers have been trained in the sustainable harvesting of wild honeybush over the past year. The goal is to move honeybush production from wild harvest to cultivation by enabling and developing communities in these agricultural skills.

The honeybush agricultural industry has the potential to grow, as there is a strong demand for the product. The objective is to do this sustainably, with the necessary support to farmers and communities.