Gill, Adele and Dick gave me a call to see the proposed development site on their 5 000ha game farm near Vryburg. 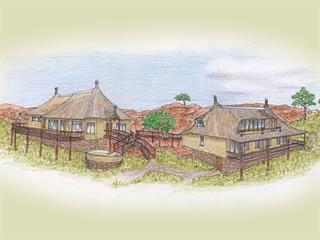 It needed to be upgraded to permanent building accommodation from the current tented camp.

The proposed site was on the edge of an ancient volcanic outcrop of buff-red lava. An ideal location I thought, being elevated, north facing and having tranquil views over the flat-land game park.

We also decided to have the entertainment area separate from the sleeping area, as men being men can sometimes carry on a bit when others want to sleep. Much chattering later and ideas gelling, the consensus was for the buildings to have rustic game-park appeal. Only one big problem – we were caught between a rock and runaway veld-fire. These fires were frequent and would definitely pose a fire-risk to the thatched roofs.

“So let’s find a compromise,” I suggested. Runaway fires, caused by strong wind, is the main cause of fire to thatched houses. So let’s protect the outside to reduce risk by 80% or more.

Erect your normal thatch roof with a thinner layer of thatch than usual – a spreilaag, as it’s called. Then cover the outside with half a dozen or more suitable roof coverings.